Filling the gap in the enterprise-applications cloud

The massive inquiry and strategic change that grew out of Queensland's failed HR system reflects a growing recognition amongst public sector organisations that even core back-end systems are undergoing massive transformation as tighter budgets and better technology combine into a perfect storm of transformation.

While history has shown that core business systems remain in place until they absolutely must be touched, the growing richness of cloud-hosted solutions is driving many government agencies to consider the model as they explore new ways of minimising their ongoing application spend. The need for transformation was reflected in the Queensland government's recent decision to adopt a 'cloud-first' policy for ICT procurement going forward.

It will, however, take time for the strategies to translate into concrete action. This leaves many government organisations facing time in limbo as they look for ways to extend the life of existing finance and other enterprise applications while planning their path to the future. With increasingly-mature cloud-based finance and other applications rapidly taking their place amongst the panoply of government systems, this process involves every level of the IT organisation.

Greg Hope, senior systems and network administrator with the Tasmanian Department of the Premier and Cabinet (DPC), knew this all too well as he recently weighed up options for an infrastructure refresh as past of a massive back-end transformation project.

That effort “will still be years away”, Hope says, noting that it will likely include a shared-services or cloud structure that will allow the organisation to pool its resources and “get a better return for our money”.

In the meantime, however, ageing back-end enterprise applications needed a temporary shot in the arm – and got it as Hope explored options for updating the systems to ensure their performance until the larger strategy kicks in.

“We needed to keep our existing environment running along and servicing our clients to the best of our ability in the meantime,” Hope explains. “We had noticed that some users had been complaining about the delay in response times from the storage we had. We found that we needed a bit more performance as the number of systems and demand from our users grew.”

Hope's solution was to introduce 8TB of solid state disk (SSD) storage from Nimble Systems to DPC's back-end systems, freeing up bottlenecks in the three-year-old storage environment and improving the performance of the department's core enterprise applications – including its Microsoft SQL Server database, HP TRIM document management system, and the more than 60 Web sites hosted on its WebMatrix server.

A performance boost of around 10x – along with the SSDs' built-in deduplication and data-compression capabilities that double effective storage – has given DPC the headroom it needs to ensure its applications can keep ticking over until its transformation agenda is complete.

“I can keep using our existing storage for systems that don't necessarily need the speed,” he says, “and use the Nimble SSD for higher bandwidth requirement systems. In that way, our existing systems can stay in production for longer.”

Such stopgap measures are becoming increasingly common as government willingness to accept cloud solutions catches up with the policy objectives now being handed down to government agencies at every level.

One major conceptual hurdle that all agencies must clear is the difference between conventional hosted and full software-as-a-service (SaaS) solutions. The difference, says Technology One CEO Adrian di Marco, lies in the flexibility of the platform and the provider's commitment to improving those back-end applications.

“There are a lot of hosting solutions out there but very few SaaS options,” he explains. “The reason is that SaaS takes a huge commitment and is not a simple thing to do.” 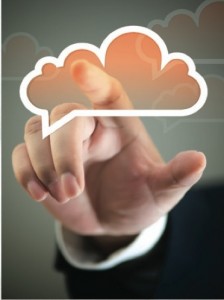 Even Technology One wasn't originally going to be a SaaS provider, but decided to take the jump after it became clear that profit-minded hosting partners simply weren't putting the effort into the overall quality of the user experience.

“We were originally happy for our solutions to be hosted by third parties, but we saw the disaster that it was,” he recalls. “The third parties basically got paid a fee for service, and they weren't committed to the service. Every time the customer wanted to do something, it costed them more money.”

“That's why we ended up becoming a cloud provider,” he continues. “There's such a quantum difference between hosting and SaaS, but the market doesn't quite understand that yet. It's a journey and a long one, and there will be a lot of disasters before people twig onto it.”

By the time the cloud transition is in full swing, it will need to accommodate procedural changes such as the government-driven SuperStream initiative, which will fundamentally reshape employers' financial processes by streamlining the handling of superannuation.

This process has become more complicated due to the growth of self-managed super funds over the past decade – and that's where third-party providers will leverage cloud technologies to help larger organisations make the transition by the time the new policies take effect in June 2015.

“It's bringing superannuation up to the level of what people are comfortable with,” says Shaun Flannery, chief technical officer of specialist HR and payroll consulting company Presence of IT, which is positioning itself as a cloud-based intermediary to help organisations of all sizes transition to the new superannuation arrangements.

It's a “roundabout process” that necessarily involves systems changes to established SAP, Oracle, and other applications. Files must be produced in a government-mandated format, simplifying the process of clearing what Flannery says is more than 100m superannuation transactions per year.

Such change doesn't come easily, and it will be some time before government bodies find and embark on a clear forward strategy that will reconcile their need for enterprise applications with the flexibility and scalability of the cloud. Victorian ICT minister Gordon Rich-Phillips, who also serves as the state's assistant treasurer, summed up the enterprise applications challenge succinctly in his recent update on the state's ICT strategy.

“The types of services provided by financial institutions, banks, and stockbrokers has changed forever the community's expectations in terms of service delivery,” he said.

“The imperative is there for government to also change the way in which we deliver services; this is an area in which, frankly, we as a government haven't kept pace. We're recognising that we as a government can't afford to lock into platforms because offerings in the marketplace change so dramatically. Governments need to be far more cognisant of that, and recognise the opportunities change has created."

“The previous model of large, expensive, complex projects was not going to work in the future,” he said, “and the advent of cloud and fee- for-service models has changed the environment in which government operates irreversibly. The pace of change continues to accelerate, and we as a government need to be increasingly nimble to take advantage of those opportunities.” – David Braue