The appeal of cloud computing may be undeniable, but government organisations need to weigh up their internal preparedness to become cloud providers to make the right choice between adopting public and private cloud services, Dan McLean, senior service development manager, vCloud, VMware APAC warned as he addressed the audience at the Cloud Computing Forum 2012.

By undergoing a long-term process of strategic planning, this process can be undertaken and completed with relative ease — and increased clarity around the need for constant change in business requirements. Thinking about where your company will be in five years is hard enough, but with cloud computing evolving at breakneck pace it’s hard to match those corporate objectives with predictable technology change even two years out.

“If we can get more agility from the cloud into our IT services, that can lead to agility of those business services,” McLean said. “But we know from the marketplace that it’s going to look very different in 24 months’ time — so the resonating requirement to deal with that is flexibility and response to change.” 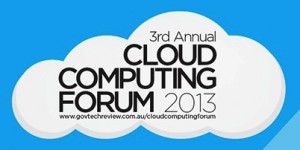 Private clouds offer significant benefits in terms of ownership of infrastructure, security and control — but not all organisations are able to easily make that shift. That makes it particularly important for organisations to consider whether their IT infrastructure is up to the internal changes necessary to become a service provider. This includes not only the basic virtualisation capabilities, but also involves the way that they are presented to the business.

“IT is delivering these services into their organisations in a way that is very cloud centric,” he explains. “They need to start introducing the concepts we see in the cloud environment, from the catalogue style of delivering services to the delivery of self services, and the delivery of IT services in the application room and the platform space.”

Infrastructure is a significant component of this assessment: refreshes frequently go hand- in-hand with the shift to cloud computing, but they are typically capital intensive — and that can become a problem. Many organisations have identified the desire to build an internal cloud but found, due to normal business restrictions, that the necessary capital simply wasn’t going to be available for some time.

Lower capital costs are a significant element of the appeal of public cloud services, which “provide a level of agility that’s just not available inside the organisation,” McLean says. “You can really scale up and down, whereas inside the organisation scaling down as the business changes is difficult to do — because at some point, you’ve had to acquire the technology needed to scale up.”

Given the relative merits of both public and private clouds, McLean believes many organisations will favour a hybrid approach in the short term — combining a service-centric infrastructure shift with the flexibility of a public cloud environment. Over time, ever more- mature government bodies will find ways to start managing both environment using consistent business rules.

The key is to embrace change in all its forms — and continually revisit business requirements to ensure service objectives are being met. This includes reframing service level agreements (SLAs) in business-centric terms, delivering catalogues along similar lines, and moving from cost-recovery to pay-per-use models of business services that seamlessly link public and private clouds.

“Government is the most virtualised market in Australia, and Australia is the most virtualised country in the world,” says McLean. “Most organisations have their production IT virtualised, and have achieved a level of reliability to provide those services — but now that’s moving into unlocking the agility inherent in that infrastructure, and delivery of high-level services directly to the business. It’s not a one- cloud-fits-all answer; it’s about building a cloud service that is unique to your organisation and aligned to your business needs.” – David Braue

This feature originally appeared in the February/March 2012 issue of Government Technology Review. Dan McLean was presenting at the Cloud Computing Forum 2012 conference in Canberra.

The Cloud Computing Forum 2013 will be held at Rydges Lakeside, Canberra on 20 and 21 February 2013. Click through for more information, or to register.