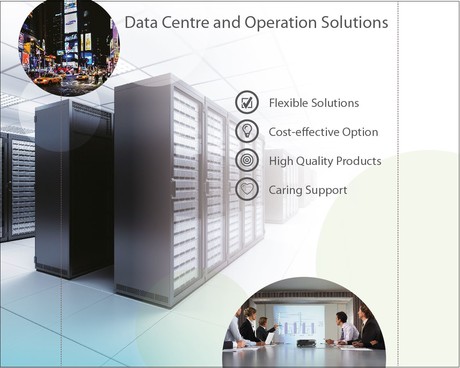 The energy needs of server rooms, the heart of an enterprise, are escalating dramatically year by year. In 2015, the total power consumption of server rooms worldwide came to 416.2 terawatts per hour, greatly exceeding the total power usage of advanced countries such as the United Kingdom. Add on to that the fact that power consumption resulting from the cloud will increase 63% by 2020, according to a Smarter 2020 report, and the magnitude of the issue becomes clear.

The high-density server rooms fueling the ongoing expansion of the cloud represent a fixed expenditure for enterprises in order to ensure smooth business operations. But as energy conservation and carbon reduction has become a critical global mission, businesses now must find a way to make full, efficient use of power while still reducing IT costs. This is the vital role played by the power distribution unit, or PDU.

The PDU has already existed in server rooms for 20 years as the unsung hero behind the scenes. Its key function is to ensure the supply of energy within the cabinet while at the same time avoiding equipment damage resulting from power surges or lightning interference. But as datacenter environments have grown increasingly complex, so have a PDU’s functions become more diverse in step, including the intelligent monitoring of power usage, remote management, outlet control, phase detection and outlet metering functions, and threshold alarms, all of which enable efficient energy management and conservation.

However, the biggest challenge for server rooms remains how to precisely control temperature and humidity. Overly high temperatures can affect a server’s reliability; conversely, too low temperatures, while not impacting equipment operation, can drive up power consumption and costs. And now, businesses face trends such as security, intelligence, and environmental protection along with new demands in power connection, measurement, acquisition and control.

Enter the intelligent PDU and energy management software. “Energy intelligence” helps IT managers find the optimum temperature and humidity control mechanism to achieve maximum energy savings. It does this by providing a visualized version of data gathered by sensors through which to manage the equipment. This data is then transferred to the air conditioning system, making it far easier for that system to control the production of cool air and keep the server cabinet operating at the appropriate temperature.

Accordingly, there are a variety of standards by which server room temperatures are measured. Recommendations from the American Society of Heating, Refrigerating and Air-Conditioning Engineers (ASHRAE) state that temperatures should be maintained at between 18 °C and 27 °C. Meanwhile, temperature safety and environmental controls efficacy standards are set in line with the Rack Cooling Index (RCI) and Return Temperature Index (RTI). RCI pertains to server room safety and is used to determine whether IT equipment cooling is properly managed and falls within the temperature parameters set by ASHRAE. The purpose of the RTI, meanwhile, is to ensure there is no net by-pass air or net recirculation air during the cool air transfer process. These two indexes enable intelligent energy software to guide the energy saving process and optimize cooling.

An intelligent PDU must be able to gain immediate, real-time access to energy consumption and temperature / humidity related data to ensure the safe functioning of the equipment. Without real-time monitoring, companies fall back onto either setting temperatures lower to ensure server reliability, thereby increasing operation costs and power expenditure, or setting it too high to optimize PUE (power usage effectiveness), which can increase the chances of tripping the servers and disrupting business operations. A secondary benefit of real-time monitoring is that one can adjust the amount of cooling based on the workload at different times. For example, for most businesses, the workload will be higher during the day than that at night and will drop significantly on the weekends. Conversely, for a segment such as the gaming industry, night would be the peak period while daytime usage would be very low.

Server room operation requires the consideration of both the initial investment as well as long-term operating costs. For example, annual electricity costs for a 100KW server room may exceed US$150,000, but real-time, visual data management can help enterprises to achieve significant energy and financial savings. For example, after introducing ATEN’s PE8324B eco PDU and energy intelligence software, Taiwan’s National United University was able to achieve a PUE value of below 1.6. This allowed the school to save nearly $100,000 in electricity costs per year as well as reduce carbon emissions by roughly 1 million kilograms.

With an independent power switch and Proactive Overload Protection(POP), the PDU has also become an analytic tool for enterprises to determine whether power is being overused and to maintain normal server operation. For example, a major Turkish telecommunications company’s headquarters had several large-sized datacenters, but because the management staff was not clear on the amount of power being used, they reserved redundant power to maintain the secure operation of IT equipment. This resulted in cabinet power usage clearly set at 7KW, but the actual electricity used was only 3KW.

In order to save energy and manpower, the company introduced ATEN’s new generation PE8 series eco PDU and centralized management software. The solution provided real-time environmental monitoring and alerts for IT managers who needed remote control over the power switch. What’s more, the power status of each group of outlets could be individually set so that the user could switch each set of devices on or off. And with the intelligent PDU’s POP mechanism, the telecom was no longer worried that overloading would cause the entire cabinet to trip, resulting in service interruption. That’s because the moment the PDU detects the power levels are close to exceeding the threshold rated current, it will turn off specified servers by priority to make sure the remaining servers are operating securely.

Businesses across the globe are taxed with scaling out their server rooms while remaining both fiscally and environmentally responsible. This forces them to think in terms of the short term and the longer term. By providing real-time data to IT managers, intelligent PDUs such as those offered by ATEN offer a flexible and expandable solution for enterprises to not only cut down on operations costs, but to significantly decrease their carbon footprint.

With increased threat of cyberattacks, attention for data center security is on a new threat...

The RiMatrix NG IT infrastructure platform helps IT organisations drive the digital revolution of...

Accurate data is at the core of the business of government — and any government body is...