Government agencies must push towards the adoption of IPv6 even harder than private corporations, a senior domain-name executive has warned, to ensure they continue to build on early momentum around adoption of the next-generation protocol.

Speaking via teleconference link to the Australian IPv6 Summit this week, American Registry for Internet Numbers (ARIN) president and CEO John Curran said governments needed to lead the pack when it came to upgrading their networks to support IPv6.

"It's crucial that government be a lead adopter of IPv6," he explained. "We have pushed that very hard, because the government is slow. By starting early, they have a chance of finishing with everyone else." 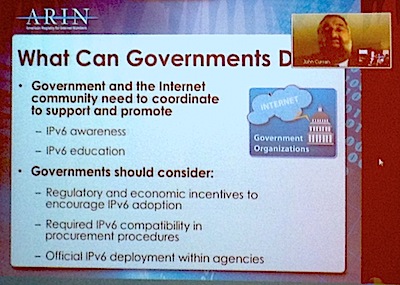 A number of governments have pushed hard for adoption of the technology, which dramatically expands the pool of available Internet addresses and is seen as essential to ensuring the continued smooth operation of the Internet as the current supply of IPv4 addresses are exhausted.

That point was reached last year within the Asia-Pacific region and will be reached in ARIN's North American jurisdiction next year, with name registries and ISPs are carefully apportioning the last remaining blocks of addresses after they were allocated. ARIN is one of five regional Internet registries, with Australia served by APNIC (Asia-Pacific Network Information Centre). (APNIC offers a range of IPv6 resources here).

Within Australia, AGIMO has laid down an aggressive strategy that is expected to see IPv6 implemented across the Federal government by this December.

"The public Internet is now IPv4 and IPv6. If someone puts a server on the Internet to serve data and they only set it up with IPv4, they are not reaching the entire community; they're short-changing themselves."

Even if they aren't running an IPv6 stack exclusively, organisations must make sure they have a dual-stack configuration – which enables servers to be reached using either current IPv4 or new IPv6 addresses – on existing and planned servers.

"The public Internet is now IPv4 and IPv6," Curran said. "If someone puts a server on the Internet to serve data and they only set it up with IPv4, they are not reaching the entire community; they're short-changing themselves."

Curran said there had been great interest from government bodies in ensuring the transition to the new protocol runs smoothly in other sectors – but that the best thing they could do for the industry, apart from setting an example through their own deployments, was to stay out of the way.

"I'm often asked about what governments can do to help this," he said.

That competition has resulted in slowly growing adoption of IPv6 as ISPs in Australia and elsewhere push out IPv6-compatible equipment to customers, who are also upgrading their application and network stacks to ensure end-to-end compatibility.

"It's crucial that government be a lead adopter of IPv6. We have pushed that very hard, because the government is slow. By starting early, they have a chance of finishing with everyone else."

Fully 77% of the members of the Number Resource Organization (NRO) – a peak body including ARIN, APNIC and the other three regional registrars – now report they have "some IPv6 presence", Curran said, up from around 40% in previous years.

Yet despite the success to date, he was cautious about governments getting too involved in the transition outside of their own walls: "You have to be a little careful," he said, "because when you ask governments to help, you don't necessarily know what you get out of the other end of that request." – David Braue