You, dear reader, are an “Aussie Muppet.” “You ain’t got what it takes.” Indeed, come the London Olympics and, “The only Golds you’ll be picking up will be from a chocolate wrapper. You won’t win nothing, Aussie. Zero. Zilch. So ... you might as well stay home, cos there’s no way you are going to be making it to London.”

The insults above are, rest assured, not the sentiments of this magazine. But they are, in a roundabout way, emotions expressed by the Australian Sports Commission (ASC), Australia’s national sports administration and advisory agency.

The Commission issued the insults in a viral web video it released in early 2009, as part of its ongoing elite athlete recruitment program. The epithets were uttered by an actor dressed in a menacing hoodie and speaking in a passable East London accent. The goading was followed by an exhortation to young Australians possessed of sporting talent to visit the ASC’s website to complete an online talent assessment program with a view to uncovering elite athletes.

Online video may seem an odd way to go about uncovering the next Ian Thorpe, but for Morag Croser, a Senior Manager with the ASC’s National Talent Identification Program, going online was a natural way to reach young people.

“You profile elite athletes and try to predict the determinants of success,” Croser explains. “We know that rowers, for example, have long legs, good aerobic capacity, good strength and long arms.” Rower Megan Marcks (who competed as Megan Still) was indentified in one such program and went on to win an Olympic gold medal and a World Championship.

Croser says these programs have made Australia a world leader in talent identification, and our success has been noticed by other nations around the world.

“People were using our ideas and doing it with better budgets than we had,” she says. Complicating matters further is Australia’s small size. Croser recognises that Australia punches above its weight in terms of international sporting achievements, but also knows that other nations simply have more talent from which to pick.

If the ASC is to continue to produce elite athletes, Croser therefore recognises that, “We have to be constantly progressive. Australia is a small country with a small population so we have to be strategic about what we do.”

“It’s also important to recognise that the fabric of sport in society has shifted a bit in recent years. Sport is not what it used to be: there are a lot more non-traditional sports attracting Generation X and Generation Y.”

It can be hard to talent-spot athletes participating in those sports, or even to spot talent at all because young people now experiment with different sports, rather than staying in one sport for years at a time.

Croser also sees a shift away from sport in the community.

“We have a lot of different family dynamics these days. We see many non-traditional family units so it is hard to expose kids to sport. Or both parents work so there are not as many kids doing after-school sport.”

While kids may not be easy to spot in a park or sporting field, finding them online is not hard at all and the ASC wanted to use the internet as a talent-spotting tool.

“As we saw the national reach of social media and social networking we realised that if this is where our market is, we need to be there.”

Online marketing also appealed because it was efficient: Croser realised the ASC could use an online test to pre-screen athletes without the need for a staff member to conduct actual screenings.

But actually getting kids to consider the ASC’s offer presented more challenges, until debate around the future funding of Australian sport gave the issue prominence.

“The funding announcement about the resources the UK were putting into the London Olympics gave us a chance to play on the rivalry between England and Australia,” Croser says, and gave birth to the idea of the English character challenging Australians to step up and develop their sporting talents to make sure Australia left its mark at the London games.

“For us it was jovial and light hearted,” she says. “It was certainly a novel approach and outside the boundaries we had operated within previously.”

“But it was well thought out and researched and a well considered project. We knew there was potential for an emotive response, but we also considered the opportunity that it could present in terms of raising awareness.”

“We ran it through all levels, including CEO level at the Commission, to our Board and to the Minister’s office. The content was screened to make sure there was nothing truly offensive in it, but we also knew that you cannot please all the people all the time.”

When the video was released, in March 2009, reaction was instant and enormous.

Myriad media, in Australia and England, reported on the video’s release and the aggressive challenge it contained, driving enormous demand for the video.

The ASC’s web hosting budget was blown away. “We had considered the IT capacity before we went live and then we had 16,000 views of the video in 24 hours. We blew our web hosting budget in one day, which was a nice problem to have.”

The Commission quickly moved the clip to YouTube to save bandwidth and money, then braced itself for the 850% increase in traffic as viewers went beyond the video to explore the online talent assessment tools that were the site’s real purpose.

Those tools are the payoff, as they help the ASC to identify talent worthy of a followup visit for more formal screening.

“The site is interactive and online the first round of feedback is generated automatically,” Croser explains. Participants details are also captured, creating a valuable data source for future talent-spotting programs.

“We have more initiatives all the time and something pops up six months down the track,” Croser says, “we can email them and invite them along.” A new opportunity for the ASC that it previously did not possess.

Croser cannot say if the viral video is directly responsible for a particular athlete’s entry into its systems, but can say that 18 have been recruited through its web site. “Eighteen may not sound like a big number, but this is the pointy end of the triangle,” she says. “These athletes are now fast-tracking and some are moving to national squad level.”

“You have to appreciate that it takes time to develop skills and proficiencies,” she adds, declining to name any of the 18 lest early exposure stifle their development and leaving them happily anonymous – perhaps until one of them mentions The Muppets before a medal ceremony! 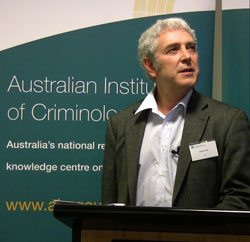 The Australian Institute of Criminology (AIC) is another agency that is enjoying success with online video.

The AIC’s main activity is researching crime in order to inform policy and program development that aims to counter it. Communicating that research is therefore an essential activity and the Institute runs regular events for the criminology community.

Video was an obvious way to share these events with a wider audience, but when the Institute considered its use during a website refresh in mid-2009 discussions about which format to use led to doubts about whether video was an appropriate medium. YouTube, which is accessible to anyone with a web browser, was the obvious answer and Kelleher legitimised the service further by successfully applying for a branded channel.

“We have the world’s criminology TV channel on YouTube,” he enthuses (see www.youtube.com/CriminologyTV).

Content on the site is perhaps a little staid, but Kelleher is comfortable with the low-fi style.

“The Australian Defence Force has all sorts of groovy recruitment videos of guys driving tanks: that is what they are all about. For us, it is all about the research and you can learn about it as if you were at the presentation. If you can’t fly from Perth to be here, you can still watch it. That’s a tremendous thing to provide for people who would otherwise have missed out.”

CriminologyTV has had around 1500 views to date, a small number but one the AIC is satisfied with as it represents a significant broadening of its reach. It also represents excellent ROI, as the YouTube channel has not required extensive resources.

Kelleher therefore believes any Government agency should consider creating its own online video.

“Every agency or business has a video camera and someone competent enough to use it,” he says. “You don’t need to spend $1million on edit suites and commercial equipment to get started.”