How to make a Prime Minister (or at least their website) 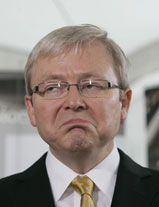 When Kevin Rudd woke on the morning of Wednesday June 23, his Prime Ministerial website was a rich source of content. As well as the usual media statements, speeches and transcripts, his site was more interactive than that of his predecessor and other Ministers, carrying videos, blogs and visitor comments.

By early afternoon the next day it would be reduced to a static page with a simple message:

“On 24 June 2010, the Hon Julia Gillard MP was sworn in as Prime Minister by the Governor General, succeeding the Hon Kevin Rudd MP.

“The Department of the Prime Minister and cabinet (PM&C) has archived material from the former Prime Minister’s website, and this will be available shortly.”

By 4.30pm that day the second sentence had been replaced with:

“If you wish to direct any messages to the office of the former Prime Minister, the Hon Kevin Rudd MP, please follow this link.”

The complete archive of his online content as PM was then made available via the department of Prime Minister and Cabinet (http://pmrudd.archive.dpmc.gov.au/) and on the National Library of Australia’s (NLA’s) Pandora archive (http://pandora.nla.gov.au/tep/79983).

Pandora staff at the NLA had completed the content capture of Rudd’s site at 2.19pm that day, the 14th time they had updated their archive of his site since he became PM in October 2007. It was posted on the Pandora site after a manual quality check.

“It’s basically a staff member looking through the site and making sure we have done as good a capture as possible, given the technical constraints,” says Paul Koerbin, Manager of Web Archiving for the NLA.

“There may be a need to fix up a few style elements to make sure it displays properly in the archive. We also make sure we haven’t picked up things that we shouldn’t have.”

The first inkling that PM&C’s IT staff would have had of their boss’ tumultuous change in fortunes came in the evening of the previous day when the ABC broke the story of the internal challenge to his leadership. As history will record, he conceded without a vote at the Labor Caucus meeting the next morning, but the formal trigger for the website change came in the afternoon when Julia Gillard was sworn in as PM by the Governor General.

Implementing website updates in response to dramatic political changes while respecting constitutional principles is a key role for IT staff in government agencies which host the sites of their Ministers.

“This is the sort of work the A-team is put on to.” says Kevin Noonan of Ovum who formerly served as CIO and a senior IT manager for Commonwealth agencies.

“There is no room for error, so it’s always the best and brightest people are assigned to setting up stuff for a new Minister.”

They don’t go into it cold. The process will have been plotted in practice sessions and most IT staff will have been involved in Ministerial site changes after elections or reshuffles.

“It would be very odd for a department not to have rehearsed a change of Minister, particularly when we are close to an election,” Noonan says.

“It would just be a matter of pulling the procedures from the cupboard, they would be used to doing that anyway, but in this case it would be a bit more dramatic,” he said.

“You have to make sure that information is relevant and current but it’s not something that sends a shiver down your spine, it’s something that you are used to doing.”

Closing down Rudd’s PM site was the easy part for the IT staff at PM&C. But it was Wednesday June 30, almost a full week later, before they replaced the single transition page with a functioning live website for his successor. According to one press spokeswoman for Julia Gillard, it wasn’t too complicated.

“The process was that the e-comms girl in the office sent some photos and material to the website guys and they just popped it up,” she told GTR.

The photos that now grace Gillard’s website were taken on Friday June 25 in the PM’s courtyard of Parliament House during her first press conference as PM. While her biography was updated, a welcome message had to be drafted and approved before IT staff had the necessary content to work with.

Meanwhile, the IT staff at the Departments of Education and Workplace Relations (DEWR) and Foreign Affairs and Trade (DFAT) also had work to do. On Monday June 28 Gillard announced that former Trade Minister Simon Crean would take over her role at DEWR while Foreign Minister Stephen Smith would assume responsibility for Crean’s Trade portfolio.

By that time, Gillard’s former Ministerial content had been archived by DEWR and her face removed from the Ministerial line-up. It would be Wednesday June 30 before Crean appeared in her place on the DEWR site at the head of two junior Ministers and two Parliamentary Secretaries.

Crean was quickly removed from DFAT’s introductory Ministerial page but it would be Thursday July 1 before he was removed from the Trade Minister’s page. For a couple of days an online visitor could thus have had reason to think that Simon Crean held two senior ministries. Kevin Noonan says that while these events can be “frantic” for IT staff, the most demanding periods can come later.

“Getting something stock-standard up in the first place should be a well-practiced activity and you would expect that to happen relatively smoothly,” he said.

“It’s in the weeks after, when they start tinkering with the preferences of the particular Minister, that it can get to be a bit difficult.”

Logistics can also get complex when it comes to taking a former incumbent’s staff and the communication devices in the Ministerial and electorate offices off the network and connecting the incoming Minister’s systems to the network.

“Updating the website is really a part of a very large piece of work,” Noonan says. “All the content has to be brought in with the technical realities that it has to fit with whatever infrastructure the department actually has.”

On top of whatever technical issues are involved, the lines of responsibility are more complicated than normal commercial practice. A Minister’s site is usually – but not always – maintained in a technical sense by the relevant department but the content is the responsibility of the Minister’s office.

“Sometimes particular Ministers can get excited about what they want on their site and how they want their website to look and that can cause some heartache for departments.”

And you never know how soon you might have to do it all again.

Clicking on the ‘Past Prime Ministers’ tab at www.pm.gov.au takes you to a page of black-and-white photographs of all the men who have held that position since Edmund Barton. To find out more, you are invited to click through to a National Archives of Australia portal with profiles and sample documents. But to plumb the online archives of Prime Ministerial content you have to go to the National Library of Australia’s Pandora site.

“Access is an important part of our mandate so the quality assurance process is a matter of us trying to collect the material and make the archival copy accessible and available as soon as we can,” says Paul Koerbin, Manager Web Archiving for the NLA.

Regular archiving of the content of the PM’s site and other Ministerial and agency sites is facilitated by approval granted to the NLA to harvest content from all agencies subject to the Financial Management and Accountability Act www.finance.gov.au/financial-framework/fma-legislation/fma-agencies.html .

“We got approval through the Secretaries ICT Board process for a whole-of-government arrangement which allows us to collect at least FMA agency government web material without having to seek prior permission,” Koerbin says.

“That makes our administrative processes simpler because we don’t have to go through the Commonwealth Copyright Administrator for everything we want to archive, which is what we had to do in the past.

“We have rarely – if ever – been refused permission, so it’s just an administrative efficiency.”

Undertaken regularly on the PM and Ministerial sites – and always after an election is called – the process is performed by harvest robots with human supervision.

“Sometimes there are problems, particularly with embedded media and videos, but we do our best to get a complete copy,” Koerbin says.

“The robots are limited in how successful they can be so in most cases we have to do a bit of patching up.”

A total of 4.13TB of data is now stored by Pandora, consisting of more than 25,000 titles and over 91 million separate files. The task of collection and storage gets bigger every year – in 2009-10 the number of new titles collected rose 6 per cent compared to 2008-09 but the volume of data increased by 56 per cent.

“Each year we are dealing with more data and greater complexity,” Koebin says.

Now could be the right time to take another look at your organisation's SaaS contracts.

Government and private sector stakeholders have warmly responded to the Digital Transformation...