Much more to do for Australia's government transformation 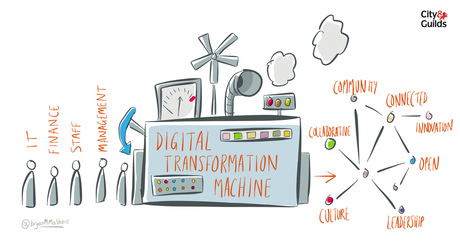 Australia’s push for digital government transformation is driving “outstanding” innovation but government agencies must still remember that much of the transformation happens far from the customer-facing content driving many digitisation efforts to date, public-sector experts warned at the recent launch of the new SAP Institute for Digital Government (SIDG) in Canberra.

“We see a lot of innovation going on here and, because of the structure of the country and what you need to cope with, this is triggering outstanding innovation,” Isabella Groegor-Cechowicz, global general manager for public services with applications giant SAP, told GTR on the eve of the official launch of the SIDG.

The Canberra-based institute — which debuted with the support of five core partners including the National Disability Insurance Agency (NDIA) and European Social Network (ESN) — was announced in November 2014 and represents a $150m commitment from SAP that includes the establishment of a local data centre that will, among other functions, support the 50 federal agencies already based on SAP software.

Having already been active in Australia for several months, staff at the SIDG had had a good chance to build relationships with the government agencies driving transformation — either on their own or under the direction of the Digital Transformation Office and its CEO Paul Shetler — and this work had produced clear ideas about the scope and nature of the transformation they needed to undergo.

Early efforts had focused on empowering the NDIA and related social-protection areas, but heading into 2016 the SIDG’s focus would expand into other lines of government such as national security, future cities, shared services and general government administration.

A common theme to date had been the focus on building new-generation business models — but many organisations, SIDG Director Brian Lee-Archer told GTR, had been putting undue emphasis on the technology of transformation and forgotten that the technology is part of a much broader story of cultural transformation.

“Technology is only a small part of this,” he said. “There are also significant change and business transformation issues that need to go on.

“We often talk about digital government and its focus is at the consumer end — nicer websites or better linked-together websites, or a nice app that I can use for a range of services — but the real insight is coming from looking beyond what is the value of data. You’re seeing many small initiatives in Australia, but the challenge is to get them all moving in the same speed and direction.”

The SIDG’s work with NDIA would provide invaluable data points about the breadth of areas that needed to be appropriately addressed during transformation, Lee-Archer — co-author of a new white paper on improving social outcomes through predictive analytics — added, calling the organisation “one of those perfect examples of policy empowerment”.

“For the NDIS to be really successful,” he added, “it will now be supported by empowerment around the services and products made available to them so they can consume and operate in this new marketplace. The most value will come from guiding people around the deeper question of how we use information for better policies.”

Availability of clearer guidance around digital transformation couldn’t come at a better time for Australia’s public-sector agencies, which have been under enormous pressure to get on the digital-transformation bandwagon this year but often confess in private that the DTO’s mandates have left their internal strategies in chaos and complicated forward planning significantly.

In a recent Deloitte global survey of public sector leaders, just 27% of Australian respondents said they were confident in their readiness to respond to digital trends — and 80% believe their capabilities are behind those of the private sector.

These figures suggested a lag in Australian digital government competency despite anecdotal reports of local transformation success: the 80% figure, for example, was well ahead of the 70% of global respondents that felt they were behind the private sector.

“There is a very compelling argument for more to be done in terms of driving the development and uptake of digital,” Deloitte Australia National Public Sector and Healthcare Leader Fran Thorn said in a statement in which she said Australian organisations are still at a ‘developing stage’.

“Most Australian agencies use pilots for digital implementation, a deviation from the more pervasive ‘top down from central senior leadership team’ approach,” she added, “and the barriers to greater adoption of digital transformation should also be noted.”

These barriers included insufficient funding, too many competing priorities and a lack of overall strategy — all of which fall into the scope of engagement for the SIDG.

Ready support by organisations such as the SIDG is designed to help close this gap, according to Lee-Archer: “The approach comes with issues that you need to consider in parallel,” he explained, “and from a technology point of view these things are real.

“The government must be saying that it can really offer value by targeting what sorts of needs a particular community, or a socially disadvantaged group, might be experiencing. We need to be able to do that in a way that brings the public along.”

As it expands its presence within Australia’s public sector, the lessons learnt through the SIDG will be pushed into SAP’s global public sector operations and help guide transformation efforts across the world, Cechowicz said. And while Australia was recognised as a leader in digital government elsewhere, other countries weren’t necessarily only trying to replicate its guidance.

“As we go into some of those new and emerging markets, and working with governments to have technology solutions, I see that they don’t want to copy the West,” she explained. “They want to leapfrog it.

“And that's where the institute will work to collaborate and create networks of experts in different institutions, and different partners around the world. It will help provide the expertise to bring it all together.”