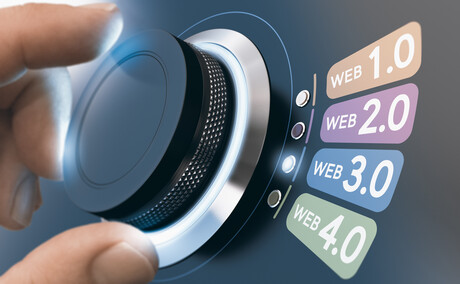 Imagine a world in which we could enjoy the immense benefits of the internet, but without vulnerability or fear of our personal data being accessed and sold.

The internet has immense potential to help users connect with one another, learn new skills and earn a living. That, however, is overshadowed by a murky environment of mistrust. Today, many businesses and even governments thrive on the collection and exploitation of user data.

The result is major online monopolies, data breaches that are rapidly increasing in both regularity and severity, and users resigned to the fact they no longer have control over their most personal and prized asset: their data. However, we’re on the precipice of a real and exciting new dawn, in which the internet can be enjoyed with more transparency, trust, security and interactivity. The future is Web 3.0. But what is it? Why are we excited about it? And how might it change our online lives as we know them?

A history of the internet

Not everyone understands them, but most people today are aware of NFTs, the metaverse and cryptocurrencies. Critics label them a short-term bubble, but the fact that so many of us know about them is proof of the arrival of a more significant, revolutionary and long-term technology. As these technologies continue to be adopted en masse, they’re helping to build a new, democratised era of the internet that improves on the limitations of the online world of today.

The first iteration of the internet was full of static websites and blogs. At the time it was revolutionary but had many limitations. These were addressed in Web 2.0, a new era of connectivity dominated by social media and user-driven sites like Facebook and YouTube. Billions of people have access to the internet in 2022, which means infinite amounts of data exists and is controlled by a small handful of technology giants who grow by using it. For example, allegations that the US Federal Election was influenced exist because of Web 2.0 and data. However, as more individuals realise that it’s not unreasonable to have a more secure, interactive and democratised online existence, Web 3.0 is growing.

To deliver the transparency, interactivity and security that users demand, Web 3.0 must be built on a technology that is deep-rooted with those attributes. Introducing blockchain, an incorruptible digital ledger used to record online transactions. Traditionally, blockchain enabled financial transactions — hence the birth of cryptocurrencies — but today it’s almost anything digital, including NFTs that represent digital art, financial or real estate assets, or even in-game items.

Blockchain is still a new technology, and we’ve only seen the tip of the iceberg in terms of its promise. However, the potential is infinite, and use cases already include not only NFTs and cryptocurrencies, but practical business solutions and even vaccination passports. Because blockchain is decentralised — which means it is controlled by a distributed network of users and computers, not a central entity — it has none of the inherent weaknesses of Web 2.0.

Power to the people

Without dependence on a third-party intermediary like Facebook or Google, the internet becomes a collective where users have ultimate control. Data is stored in a block, presided over by numerous connected computers and individual users. Through this democracy, data is not a commodity that can be accessed and sold for gain without the knowledge or say of its owners.

Web 3.0 provides data sovereignty. Users are free to enjoy the internet, moving from social media and news outlets, to games, ecommerce stores and everywhere in between. As they do so, they control their data, earning tokens and creating a public record on the blockchain. To some it may seem like an abstract concept that will never work, but so too did Web 1.0 and Web 2.0. The fact that millions of people are already investing in cryptocurrencies, joining the NFT hype, and exploring the metaverse — and billions more are at least aware of them — is evidence that it’s no longer an abstract concept.

Records on a blockchain are incorruptible, so they can’t be hacked or altered. Therefore, users can see how apps and websites use their data, and they can enjoy autonomy over who has access to their information online and how it is used. On Web 2.0, we have no transparency into how websites collect, store and sell our data. We know it happens, but we have little power to stop it.

Web 3.0 will also create an entire new level of interactivity. Users will participate more actively, adopting a role more akin to a shareholder or owner than a user. They can tokenise activities and assets, like documents, achievements, games and artwork, creating a completely new way for people to interact and use their intellectual property. When people have this influence, they’re more engaged and inclined to make Web 3.0 a place where billions of ‘shareholders’ can interact, learn and enjoy.

Because companies like Meta, Google and Amazon are so wealthy, influential and unwilling to concede their control, it’s unlikely that Web 3.0 will replace Web 2.0 overnight. However, technology giants are acutely aware of its potential to dilute their power. Facebook’s rebrand to Meta and focus on the metaverse was a significant and very public signal of intent, and behind the scenes many other Web 2.0 giants are devising strategies.

They recognise that as Web 3.0 grows, it has the potential to render the internet as we know it obsolete. It remains largely theoretical to the masses today, but under the surface is a technology of immense proportions. As every new cryptocurrency is born, NFT bought and metaverse avatar created, that potential is evolving and becoming more real.