Built using the widely-used ArcGIS platform but running on Amazon’s EC2 and S3 cloud-computing platform, the Australian-developed cloud solution allows organisations to rent access to a full suite of GIS capabilities on a month-by-month basis.

That’s a big change from conventional implementations, which require the solutions to be hosted internally and supported by specialised staff. And, says Esri Australia executive manager for professional services Jeff Robinson, it should significantly improve casual access to the benefits of GIS technology. 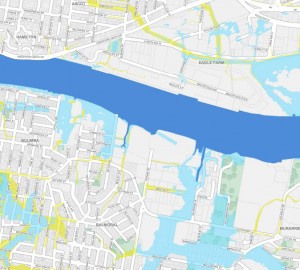 “As the GIS solution is hosted on the Amazon Cloud, it can be scaled up and down instantly to meet demand – whether it’s one user or one million users accessing the system.”

The system has been used in anger before, with Brisbane City Council (BCC) testing it as far back as 2011. During that city’s response to the local flood crisis, Esri worked with BCC to build and deploy its BCC Flood Map.

That map was accessed by more than three million residents and, thanks to the cloud-hosting design, had zero down time, Robinson said – “taking the pressure off BCC so they could focus their attention elsewhere.” – David Braue