Councils big on GIS but some still struggling with business links: survey

Nearly one-third of local governments are still struggling to understand the value of geographical information system (GIS) investments and half have no plans to increase their investment in GIS technology, an extensive survey of local-government attitudes has found.

The 2013 GIS in Local Government Benchmark Study, a joint project of Esri Australia and the Surveying and Spatial Sciences Institute (SSSI), surveyed 150 representatives of local governments nationwide– ranging in size from four employees to 7000 – about their use and perceptions of geospatial systems.

Its findings painted a picture of current attitudes and investments in geospatial technology, as well as gauging its increasing integration with other business systems and usage outside of traditional silos. 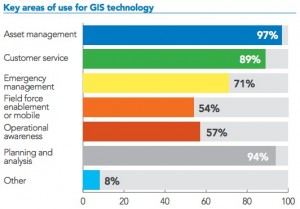 GIS technology is widely used in local governments for specific tasks, but many councils are still working on bridging the IT-business divide. Source: SSSI/Esri Australia

Fully 68% of respondents agreed or strongly agreed that the value of GIS is “widely understood within my council”, with 85% indicating that all departments in the council were accessing the GIS systems and the others indicating that use was focused on engineering, GIS or IT departments.

“There is still a limited understanding of how GIS really creates business advantages,” said SSSI president Gary Maguire, who sees a “vibrant future for the profession.”

“The study highlights the importance of geospatial professionals and their knowledge, experience and understanding of emerging trends for location-based technology. Local government administrators understand the power of location, but many still cannot put an enterprise location-based solution together as part of a total business platform.”

That lack of complete integration was not hindering usage of the systems for specific business purposes, however: 97% of respondents were using GIS systems for asset management, 94% for planning and analysis, 89% for customer service, and 71% for emergency management.

As with many other parts of the IT industry, mobile and cloud technologies had expanded the ways that users were accessing GIS systems: 12% said they were already utilising cloud-based GIS systems and 54% were accessing GIS data via mobile – creating significant new access channels for technology that had long been constrained to desktop and server deployments inside the organisation. – David Braue

Why good data management is the key to quality patient care