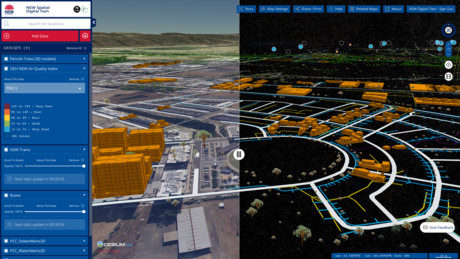 A new platform displaying virtual 4D models of NSW built and natural areas could soon be used to inform urban planning and policy and help communicate infrastructure development plans to the public.

The ‘Digital Twin’ — released by NSW Department of Customer Service’s Spatial Services and CSIRO’s Data61 — combines data from sensor, satellite and drone technologies to show how buildings, strata plans, terrain, property boundaries and utilities such as power, water and sewer pipes have changed and are changing over time.

“Till now, decision-makers have referred to property boundaries in 2D. Having them available in 3D together with how they have changed over time, and being able to easily share this with other related data makes it much easier to fully understand the context of the boundaries.

“An infrastructure developer can now use the digital twin to identify the location of underground utilities before building works commence, or see the potential impact of planned future infrastructure.”

While most information is publicly available, built-in security features ensure only “authorised individuals can access certain types of data”, CSIRO said in a press release.

The ‘NSW Spatial Digital Twin’ will initially visualise local government areas comprising Western Sydney City Deal and Greater Parramatta to the Olympic Peninsula before expanding to other areas across the state, it added.

Data-driven urban management is projected to attract $5–10 billion revenue in the Asia–Pacific region by 2028.

In future, CSIRO hopes to partner with “government and industry across the country” and “harness these technologies into a federal collaboration platform enhancing Australia’s smart cities and delivering significant benefit to Australia’s economy”, CSIRO’s Data61 Acting Director, Simon Barry, said.