The threat of bushfires is an ongoing reality for rural councils like Mitchell Shire Council, a 2684 square-kilometre area that lies 40km north of Melbourne and has approximately 36,000 widely dispersed residents.

Mitchell abuts the area where the notorious 2009 Black Saturday bushfires swept through Victoria, so bushfires are constantly on the minds of the council’s managers. To minimise the threat, the council maintains an ongoing fire-hazards monitoring program in which council officers patrol the region and note conditions that could contribute to the spread of bushfires, such as tall grass. 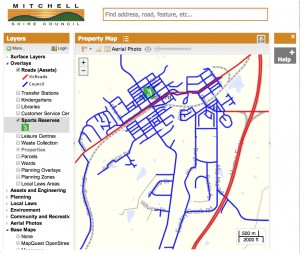 The labour-intensive nature of this task had long ago driven the council to look into mobile technologies to facilitate this task, and it had years ago installed a mobile ecosystem complete with personal data assistants (PDAs), syncing stations, specialised software, and proprietary accessories.

“Some of the software alone was $1000 per unit or more,” recalled Simon O’Keefe, a geographical information systems (GIS) consultant and principal of GIS consultancy Groundtruth, which recently began working with Mitchell Regional Shire to revisit its expensive mobile environment.

“There was no app store,” he told attendees at a recent GITA geospatial-industry conference. “Transferring data to and from the devices involved docking cradles, Microsoft ActiveSync, cards, card readers and so on. All of these things were barriers to what they wanted, which was an effective communications link between the office and the field.”

The public GIS. Mobile technologies have progressed so far in recent years that Groundtruth knew Mitchell’s processes could be substantially improved by developing an alternative system that could be accessed using staff smartphones. Developing a proprietary app for tracking the bushfires, however, was be a complex and difficult course of action.

Rather than replacing one proprietary mobile interface with another, Groundtruth worked with Mitchell Shire Council to take a completely different approach by building a Web application that would leverage a Web-based GIS system that it had recently installed for the council with some unusual operating parameters.

Whereas GIS systems are normally tightly controlled within the council for use by staff, Mitchell’s adoption of Groundtruth’s Pozi GIS had allowed it to develop dual GIS interfaces – one for staff to use internally, and a feature-limited version that is available to the public.

That interface combines data from Mitchell’s own shire records and state mapping details to allow members of the public to search for information about the shire on a per-property basis. The interface also links to Google Street View to show property information in the same window, while other features include generating PDFs, zooming, and so on.

Password-protected layers allow staff to access far more information including more- sensitive data such as valuations; this approach has already facilitated the swapping of valuation info with other bodies online rather than having to exchange MapInfo data files as in the past.

Going mobile. The desire to improve Mitchell’s bushfire monitoring drove Groundtruth’s development team to spend several days coding a new application, which they called Pozi Mobile, that would provide a mobile interface into the same Web-based GIS that staff and the public had already started using.

Built around open-source and standards-compliant tools, the Web client was built using HTML5 and JavaScript libraries such as the Sencha Touch touch-control layer and the OpenLayers Mobile mapping environment. The Web-based GIS server was built on PostGIS, a spatial extension to the PostgreSQL object relational database, and the GeoServer tool for sharing and editing geospatial data.

The HTML5 mobile app included special functionality allowing council officers to add new fire-hazard records, then follow them up weeks later and issue penalty notices if they had not been remedied.

With iPhone or other mobile device in hand, the app allowed them to enter a new record every minute and have it automatically updated on a central server. This is substantially faster and easier than the old sync-based solution.

Simply pushing the mobile app onto officers’ mobiles wasn’t the only key to making the system work., however: it was, O’Keefe points out, actually the decision to offer a public-facing GIS that simplified Mitchell Shire Council’s push to go mobile.

“What they had in their favour was that the existing GIS infrastructure was outside their firewall, where it was visible to both internal and field staff,” he explained.

The success at Mitchell Shire Council has driven Groundtruth towards similar installations at other councils. Rather than telling them to spend tens of thousands on specialty devices or hardware or on building an iPhone app, the firm now encourages an open-source approach that has proved entirely device independent.

“You’ve now got multiple devices, either in a browser or on a mobile device,” O’Keefe explained. “Once you’re on the Web you can take advantage of the delivery platform; it’s just as easy to share information to people in the field and the public, as it is to share with the person next to you.” – David Braue