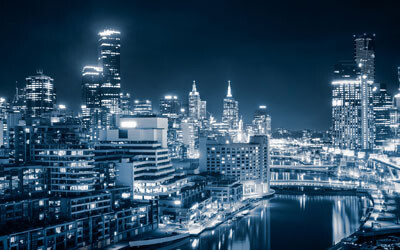 According to IBIS World, Australia’s level of urbanisation is a staggering 77%. This far outpaces the rest of the world which, according to the United Nations, is around only 55%. Having such a high proportion of the population residing in urban areas highlights the need for smart city technologies that can continually improve the way of life for citizens and visitors.

While many different technologies can be implemented, it’s important to understand the power of a collaborative approach to deployment and use of these technologies. By transforming government from a series of siloed organisations and technologies to collaborative, integrated services, leaders can unlock the benefits of a truly smart city.

Deployment of smart city technologies is still a work in progress, however. While there are certainly examples of standout cities, such as Brisbane, more widespread usage of transformative, integrated solutions to urban needs have faced challenges. There are always unique wrinkles to any smart city technology deployment, but generally there are three common hurdles to truly collaborative solutions: funding, people and data.

The ‘people’ part of the equation surfaces as different organisations, both public and private, collaborate to bring new, or more integrated, services to life for a better citizen experience. Public officials are often conservative about becoming early adopters of new technology. The federal government’s Smart Cities Collaboration Platform is an excellent resource for cities setting out on the smart city journey. It provides information on smart city projects throughout Australia. While this information can serve as a blueprint for others, it isn’t exhaustive and requires a city to take the first step to share the information.

Another people issue that tends to stand in the way of collaborative implementations is the question of project ownership. First-movers often take leadership of inter-agency initiatives, which can cause friction with the other stakeholders over time.

On the data side are the issues of sharing and integration. Many collaboration projects have failed because the technologies can’t integrate data from disparate systems, sensors and devices. On paper, it makes sense to integrate each organisation’s data for a holistic understanding of shared challenges and opportunities. But in practice, the lack of uniformity in data standards between agencies can become problematic, and the integration is too complex from a technical perspective. However, even when the data integration hurdles are overcome, organisations may still be hesitant to share data. They understandably want to have full control over when and how data is shared and who has access to it.

However, flexibility around data and processes is also needed for temporary initiatives like disaster relief. For example, recent storms in the Dandenong Ranges required resources from a variety of organisations including local councils, transportation agencies, power companies and first responders. Having a central location for information sharing about incident locations and power outages could have helped expedite response and clean-up.

Fortunately, these three common hurdles are far from insurmountable. In fact, smart city investments are ramping up due to progress in several areas. Harnessing transformative technology and digitalisation is included as a key theme for the government body Infrastructure Australia in its recently released 2021 Australian Infrastructure Plan.

It suggests that “governments and industry must transition away from digital by exception towards digital by default”. Emerging technologies such as those related to smart cities provide productivity gains and efficiencies to deliver significant benefits to communities, businesses and local economies.

In particular, the advent of cloud computing has made smart city collaboration more flexible, less centralised and less expensive than solutions even only 10 years prior. Somewhat relatedly, the application of machine learning and advanced analytics is transforming the rapid processing of the vast troves of information that smart cities collect.

But ultimately, the most impactful development has been the growing recognition by agency leaders, as well as the public, of the importance of collaboration to realise the return on technology investments and fulfil the promise of smart cities. A true smart city is a holistic, collaborative endeavour between the disparate parts it comprises, and requires much more than simply deploying an app or a few sensors. It necessitates rethinking everything — the funding, people and technology — to fundamentally improve our way of life.