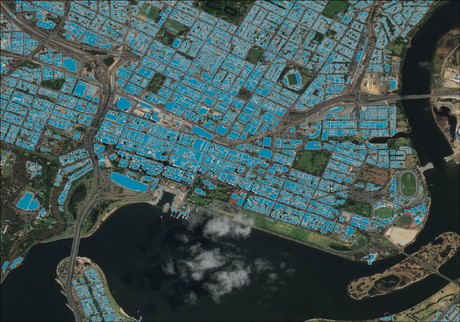 Australia currently contains exactly 15,243,669 buildings with a roof area greater than nine square metres, according to the first national ‘building census’ mapping every building on the continent.

Canberra-based location data provider PSMA Australia — a commercial organisation owned by the states and territories — has achieved national coverage with its Geoscape dataset.

PSMA Australia CEO Dan Paull said the completed project marks the first time a continent has been mapped to a level of detail that includes the location, elevation, height, roof materials and footprint of every building. The agency has also mapped all land and tree cover across the continent.

“This is a landmark achievement for data technology,” said PSMA Australia CEO Dan Paull. “Having essential, location-based intelligence mapped on a national scale for the first time will drive Australian innovation. People inherently understand that location, like time, provides a framework for analysis, revealing insights previously invisible. Access to detailed location data is essential for improving services for consumers, businesses and governments.”

The census found that less that 5000 (4953) of Australia's buildings are considered to be high-rise, with a height of over 35 metres. This would put the entire country at only seventh on the list of the top 10 global cities with the greatest number of high-rises.

Despite having 31.7% of Australia’s population, NSW has only 27.8% of its buildings. Meanwhile, Victoria has the biggest buildings in Australia and is the densest state, while Queensland has the highest number of buildings in remote communities and Tasmania is the most rural state.

The data will be made commercially available to Australian organisations for purposes including town, urban development, telecommunications and emergency preparedness planning.

The Queensland Building and Construction Commission (QBCC) is already using Geoscape to identify buildings that may fall within the scope of new combustible cladding legislation.

Up to 80% of all data globally has a location component that most people use on a daily basis,...