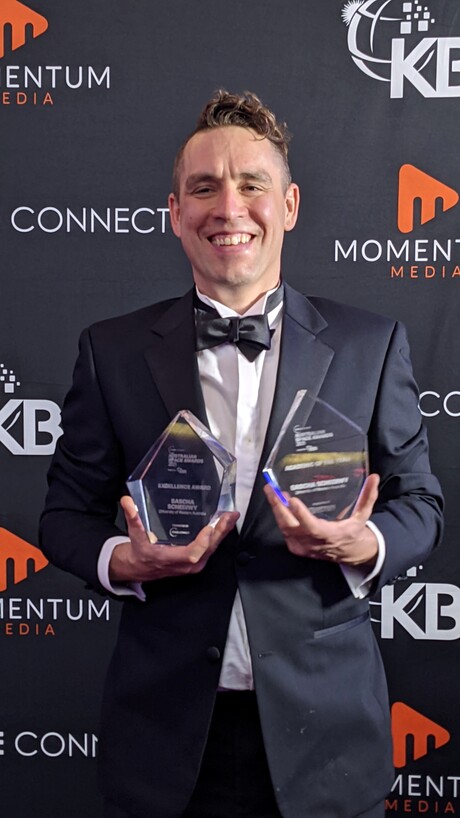 Astrophysicist Dr Sascha Schediwy from the University of Western Australia and the International Centre for Radio Astronomy Research (ICRAR) has been named Academic of the Year and received the overall Excellence award (the top award) in the 2021 Australian Space Awards. The awards recognise the best and brightest who are driving the development of Australia’s space economy in the Australian space industry.

Dr Schediwy was recognised for his achievements in space research, in particular the use of free-space laser links to send communication and timing signals through the Earth’s turbulent atmosphere and eventually to outer space. Dr Schediwy and his team currently hold the world record for the most stable transmission of laser signals through Earth’s turbulent atmosphere, as demonstrated on a horizontal test link with the equivalent atmospheric turbulence as a link to space.

Dr Schediwy’s developments could enable better time-scale comparison than the next generation of optical atomic clocks, leading to the establishment of a global optical time-scale comparison network. Such a network could revolutionise applications ranging from physics, such as tests of the General Theory of Relativity and dark matter searches, to science of Earth’s geometry, gravity, satellite navigation and timing, and research into light, radio and sound waves. Dr Schediwy said the awards were a testament to the hard work and support of this team, colleagues and scientists at UWA and ICRAR.

“I am extremely honoured to have been selected to receive these awards, especially given the esteem of other finalists. I look forward to working with the rest of the Australian space community to advance Australia’s role in space over the next 12 months and beyond,” Dr Schediwy said.

“Sascha’s research has set new world records in free-space laser links and his leadership has led to lasting partnerships with the space industry,” Professor Obreschkow said.

More expert pharmacists needed in the era of medicine miracles