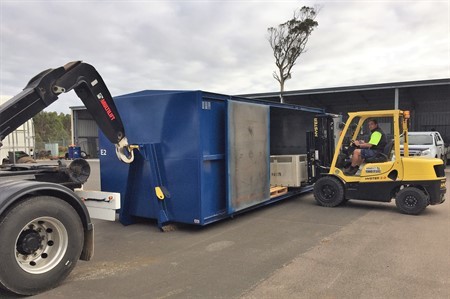 An e-waste collection and storage prototype is currently being constructed by East Gippsland Shire Council.

The prototype was designed by Council’s waste team in response to the impending ban on e-waste being disposed of to landfill from 1 July this year.

Mayor Natalie O’Connell said the prototype was designed by the waste team, aligning with the hook-lift truck operations and considering customer and staff safety in the design.

“This is the first of its type and has been mentioned by state departments at many e-waste workshops conducted, and has subsequently attracted attention and interest from other councils in the recent months,” O’Connell said.

“The prototype is the first of its kind fabricated by the waste unit staff and constructed in East Gippsland. It includes a 30 m3 enclosed skip bin with entry from the two sides to suit any waste transfer station. It is designed to store up to 10 pallets/stillages, providing a safe e-waste handling/disposal option.

“This prototype will be seen at our waste sites at Bruthen, Omeo, Orbost and Mallacoota leading up to July 1 when the e-waste ban starts.

“The prototype has overcome some key challenges pertaining to our shire in terms of storage, logistics (compatible with waste operations), flexibility (can be used at other waste facilities if required), cost (cheaper and sustainable option) and safety.”

Council has received $446,400 in grant funding delivered via the Victoria Government’s $15 million investment into increasing community access to best practice e-waste disposal points and improving the capacity and capability of the state’s collection network to receive and managing increasing volumes of e-waste.

E-waste can be described as anything with a plug or battery that has reached the end of its useful life. It includes everything from old mobile phones, computers and related equipment, audio devices, refrigerators and other white goods, hair dryers, televisions, heaters and air conditioners.