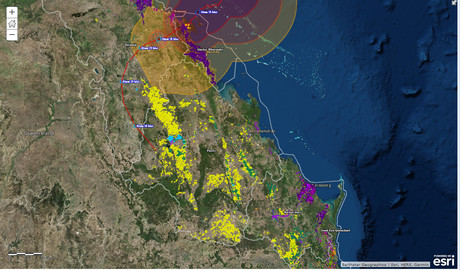 Queensland government scientists have developed an online land use map to assist in recovery efforts for agricultural lands ravaged by Cyclone Debbie.

The map was developed by the Department of Science, Information Technology and Innovation’s Remote Sensing Centre as part of the Queensland Land Use Mapping Program (QLUMP).

It shows the areas of primary agricultural land within the destructive wind zones of the tropical cyclone and the subsequent fallout.

The map has been produced using a range of both satellite and aerial imagery as well as on-ground data collected with a purpose-built app.

“Tropical Cyclone Debbie devastated north Queensland communities and impacted greatly on agricultural land in the area, and other parts of the state,” Queensland Minister for Innovation, Science and the Digital Economy Leeanne Enoch said.

“Map data provides critical information for planning and responding to, and recovering from, the impact of natural disaster events... QLUMP’s data provides information to industry groups and the government to identify affected locations and the extent of land uses which were impacted, and to support growers and other producers who have been hit by this natural disaster.”

The map is also being used to convey data designed to help assess the damage and loss of certain tree crops as a result of the natural disaster using data from a four-year national tree crop mapping project.

Scientists from both teams have also co-developed an app that will allow citizen scientists, such as farmers or students, to upload their own photos and observations of land use across the state.