Next-generation LTE mobile technology is growing quickly in Australia, and a demonstration of emergency-services technologies in Perth explored some of the possibilities it offers for emergency services organisations as they push sophisticated high-bandwidth applications into the field. Many of the applications at the demo – organised by Motorola Mobility to demonstrate a range of proof-of-concept technologies – were designed around improving situational awareness through the real-time delivery of information to field staff. 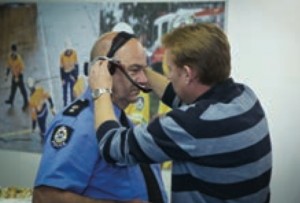 For example, LTE-connected glasses are capable of streaming situational information and projecting it in front of the user’s field of vision as they navigate an emergency scene. In this and other applications, the high bandwidth of LTE means high-quality streaming video – all but impossible to deliver over current networks – can be integrated into situational response tools. At the Motorola demonstration, a simulated vehicle accident during a bushfire scenario used streaming high- definition video to relay situational information to a range of emergency staff. Another scenario involved the rescue of citizens in a flood: emergency staff with handheld devices, putatively sitting in helicopters surveying the scene, could mark buildings on a shared map as they located citizens that needed rescuing; these maps would then be accessed and updated in real time by ground staff as people were progressively located and rescued by boat. “You need to have enough capacity to deal with these and other scenarios,” says Motorola was among those hosting a range of emergency- services staff at the event. Such applications, Starr said, would help put high-quality situational information into the hands of staff where and when they need it – and overcome the constraints imposed by current 3G and emergency-services networks long forced to economise on data transmission to accommodate severely limited bandwidth and performance constraints. Automatic license-plate recognition, which has recently been rolled out by the WA Police, was demonstrated as an example of an application that would be enhanced as it’s migrated from current narrowband digital radio to LTE, which has adequate bandwidth to carry high-quality video that’s contextually relevant. “Today, emergency staff are working over narrowband and they’re getting a small thumbnail of [a suspected perpetrator] based on picking up a hot number plate,” Starr explains. “But if they could get live footage from a nearby camera and could see the area, they would be coming in with far heightened situational awareness.” In this future vision, emergency vehicles would be fitted with LTE hotspots that connect to the network and configure themselves as a Wi-Fi base station, allowing the connection of any sort of wireless device in the immediate vicinity. Spectrum contention One major issue in the rollout of next- generation wireless is the availability of suitable radiofrequency spectrum: indeed, with LTE licenses not yet handed out, Starr said the main reason Perth was chosen for the demonstration is that it’s one of few sites where scientific licenses are available for temporary LTE research and demonstrations. Emergency-services organisations have been in discussions with the government about allocating a dedicated radio band in the prized 700MHz ‘digital dividend’ spectrum, but other proposals have suggested the allocation of LTE spectrum in the 800MHz range so as to not compete with emergent demand for limited 700MHz commercially licensed bandwidth, which have been allocated in formal spectrum auctions for use after 700MHz analogue-TV spectrum was switched off nationwide on 31 December 2013. Applications don’t care what frequency they’re running over, but mobile devices must be capable of connecting to available frequencies; thankfully, Starr says, the use of 800MHz spectrum in some overseas jurisdictions should ensure that 800MHz-capable devices are available should Australia go down that path.

Whichever band is ultimately chosen, emergency-services authorities will need to accommodate for holes in LTE coverage that could affect the continuity of their information delivery. Starr envisions this happening using fallback to public 4G and 3G networks, which may have better coverage in some areas. To prevent congestion, authorities would need to be able to force those networks to reserve a swathe of bandwidth for emergency-services operations – for example, if a SWAT team were called in to handle a rapidly emerging situation and the spectrum were needed to deliver real- time video on the ground. Experience has shown that bandwidth usage increases dramatically during such situations as citizens rush to make phone calls. Motorola demonstrated tools that would allow authorities to retain usable spectrum in such situations, with a priority manager that can create a bandwidth ‘bubble’ that follows key staff so they always have enough LTE bandwidth to stay in touch. “The key to using these tools to boost to public safety is the ability to tweak a scenario,” Starr says. “It’s that ability to get that level of granularity, or – when there’s more public 4G spectrum – to roam onto a public network and push people off of that network so the public safety officers can take advantage of that coverage.” Motorola also demonstrated Real-Time Video Intelligence, a software feature that’s capable of throttling back the amount of bandwidth used to ensure all emergency-services staff get usable video regardless of available bandwidth. This ensures the participation of a broader range of responders using a variety of devices and available bandwidth. Details of services to be rolled out via LTE are still nascent, but Starr hopes these types of demonstrations will keep emergency-services authorities thinking about how they can use next-generation LTE wireless services to augment their delivery capabilities. “The theory of all this is important, but sometimes it’s more helpful to bring it to life so emergency-services staff can experience how they’d use it in their jobs more effectively,” Starr says. “These things are changing so rapidly that it’s a bit of a dare-to-dream situation. But this was all about bringing it all to life. The baseline use of data will increase significantly, and these applications will be unleashed when there’s enough resiliency in the network to support them.” – David Braue This feature previously ran in Government Technology Review magazine.
Related Articles