Mobilising the government? We have an app for that.

The relentless explosion of data, how to handle it, house it, mine it and leverage it is depicted as the private sector's bete noir – but in the public sector, these rich data issues are amplified by a range of factors. New approaches to field service and mobile data access are helping many government organisations keep up.

All layers of government are currently not only dealing with the streams of data that they have at their disposal, but how to integrate these cross current streams across multi-layers, divisions and geographic boundaries.

In many areas, local councils are trailblazing in mobile applications innovation – and showing state and federal governments how field-service apps can be implemented to derive business, social and community benefits from big data.

Those councils are finding it of paramount importance to grapple with the explosive growth of local data, storage data management – and using that data for the wider benefit of the community. IT managers and CIOs are finding that using mobility and applications that leverage data is about the ways in which the council can use services in a better way for the community, and how they can store that information and manage it data in a more effective way. 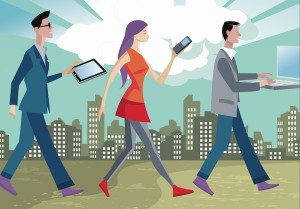 Australia’s sixth largest government authority, Queensland’s Logan City Council, has been one of the more progressive in terms of using mobility to help power the community’s utility, information and communications needs.

According to CIO Jim Barclay, the Council is concerned with getting a better share of information among the different tiers of government. Management and processing of that data into meaningful and timely information is of paramount concern: “trying to find relevant information across layers of government and departments is always a challenge,” he explains.

“We are building new cities, yet we are still building them in the same ways. Private and public entities are all holding disparate bits of information and it doesn't help citizens at the end of the day."

“Previously we had the approach, let’s improve technology, whereas Glentworth provided a real focus on what information is needed, and where it is gathered from,” Barclay said. But with Logan’s population anticipated to rapidly escalate over the next ten years as southern émigrés flock north, Barclay says expectations will rapidly increase.

“Logan is in one of Queensland’s major growth regions and we wanted to make sure we were able to service the needs of our growing areas with a very proactive approach,” he explains. “People expect to self service, get their information from one place, and for that information to be correct.”

The council has also recently competed a data collection trial project with Rype, a Queensland-headquartered mobile and cloud integration consultancy, and Blink Mobile interactive (BMi). That mobile data collection trial, completed in February 2012, is now being rolled out and enables the rapid creation and deployment of customised electronic forms that can be completed and uploaded to Council systems using a variety of tablets, phones and laptops.

BMi’s Blink Mobility platform provides the capabilities to build and deploy many different mobile services based on existing services. This is allowing the council to extend mobile services to the field, improving its customer focus and allowing council officers to receive customer requests online in real time from mobile customers.

Rype designed the processes and interfaces to take the critical inspection data recorded in BlinkForms in addition to uploading it into the council’s pathway administrative system. During the trial, council officers experimented with two inspection forms – one for food premises inspection and the other for nuisance trees. The iPad was used by council officers as the device of choice.

Barclay says the council was assessing the roll out of the use of the mobile technology across all departments including Development assessment, animal and pest services, Road infrastructure Management and parks – where officers are required to be out in the field and report information back to council.

“The trial mobile pilot delivered increased productivity and efficiency for officers,” he explains. “They found they were able to stay in the field for longer and didn’t have to return to the office as frequently to input the data they had collected. This is something we’ve been working on for around ten years now, and it has enabled us to develop a platform which allows mobile devices to have secure access to council’s systems with fantastic outcomes.”

Adding to the complexity of government’s data management issues is the rise of social media, Web based crowdsourcing and two-way digital communications, which means that ‘other people’s data’ has become a relevant part of the public data matrix.

There's nothing like a natural disaster to push a government into creating a bigger focus on disaster and crisis management. While local government has been experimenting with social media and crowdsourcing as new modes of data collection, the Queensland flood disaster in 2011 brought the benefits of this new social and transactional data resource to the fore.

During the flood crisis, the Brisbane City Council and sunshine Coast Councils actively used social media feeds such as Facebook and twitter via mobile to relay more granular details on the effect on the floods – not only to the community but as a way of researching what was actually happening within the community when traditional modes of communication were cut.

As a result of the flood experience, sunshine Coast Council now has a dedicated social media team which works in the field, reporting back and capturing accurate information on real time issues such as road closures and infrastructure that needs fixing by the council.

The rise of social media as a mobile application, and as an application that can quickly digest rich data and disseminate to a wide community of people, has allowed government bodies to also experiment with inhouse mobile applications that would have never been possible in pre-social Web days.

Queensland Health, for example, last year developed an iPad app called The Viewer as an in- house attempt to solve the problem of aggregating disparate patient data and records from various health institutions. The read-only web-based application consolidates all existing patient information from Queensland Health systems in one place.

In NSW, local and state government have had an experimental journey into mobile apps – particularly in the transport arena with several attempts at a statewide platform suffering from teething problems.

Parramatta City Council, for one, has been heavily investing in its digital information strategy with a heavy emphasis on mobility and instructive data usage. The council has introduced two smartphone applications: Parra Smart Parking which features live navigation to car spaces using the smart phone GPS function, and Parra Shuttle Bus tracker that allows users to view real-time tracking of the city's free shuttle bus.

Parramatta’s focus on connective technologies is an initiative of the ParraConnect advisory Committee, an ongoing program that aims to help businesses, community groups, government stakeholders and residents. Both apps were developed by mobile application development and smart city solution integrator Smart Global Solutions.

“I don’t think there’s any other government in australia that has leveraged connective technologies like we have here in Parramatta,” says Parramatta lord mayor John Chedid. “Parramatta is a key employment, cultural and social hub and it is vital that we continue to improve the way visitors, workers and residents access our City.”

This feature originally ran in the April/May 2012 issue of Government Technology Review.