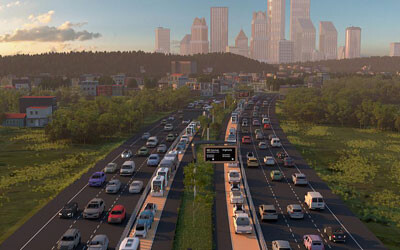 Connected and autonomous vehicles (CAVs) will soon have a road of their own, following an announcement by the US state of Michigan that it intends to build a 64-kilometre-long road corridor solely for their use.

The city has appointed Sidewalk Infrastructure Partners subsidiary Cavnue to lead a project to explore the opportunity and viability of the project in tandem with state and local partners, stakeholders and nearby communities.

The vision for the project is to create lanes that are purpose built for CAVs, combining innovations in physical, digital, coordination and operational infrastructure.

Aimed at improving the safety, efficiency, resilience and operations of the road, the project will be designed to be futureproofed to evolve to meet emerging transportation needs.

The corridor, which will encompass the Michigan Avenue and Interstate 94 roads, will be designed to support a mix of freight and personal vehicles as well as traditional transit vehicles.

During the phase one feasibility analysis stage of the project, the focus will be on technology testing and roadway design, as well as exploring different financing models, according to Sidewalk Infrastructure Partners co-founder and co-CEO Jonathan Winer.

“The time has come to start to integrate all of the momentum happening on the vehicle technology side with an equally strong push for innovation on our road assets themselves,” he said.

“We believe that combining technology and physical infrastructure can help unlock the full potential of CAVs and fundamentally transform mobility to improve safety, congestion and public transit.”

As part of the project, Cavnue will develop OEM-neutral standards and technology for the implementation of the corridor.

Initial project partners include Ford Motor Company — which is headquartered in Detroit, Michigan — as well as the University of Michigan and the American Center for Mobility (ACM).

But despite Ford’s participation in the project, CAVs that have met specified safety and other standards will be able to operate on the corridor regardless of manufacturer.

The project is in line with the state’s ambitions to cut down on the nearly 10,000 fatal automobile crashes in Michigan that have occurred in the state in the last decade, and to support economic growth and job creation in Michigan by transforming the economy around mobility and electrification.