Which smartphone is cheapest to run, most secure for government?

They may be falling out of vogue with consumers, but a comparative analysis of smartphone platforms has ranked Research In Motion's (RIM's) BlackBerry devices as the least expensive to run when configured to support UK government-level IL2 security standards.

The study, which was conducted by Strategy Analytics and commissioned by RIM, found that use of platforms other than the BlackBerry Enterprise Server and BlackBerry smartphones resulted in a total cost of ownership (TCO) 39 percent higher than when RIM's platform was used.

This included Apple iOS 5, Symbian S60, and Windows Phone 7 operating systems, which were set up in a comparable 'walled

garden' approach that used a VPN to restrict device access to an explicit, secured zone within the corporate network and used third-party mobile device management (MDM) software to manage the devices.

Strategy Analytics also evaluated the security capabilities of each smartphone platform, ranking their abilities in eleven government security-related areas such as encryption, device management security, and so on. The BlackBerry devices ranked highest of the platforms tested.

“This study highlights that the cost of setting up and managing devices using a ‘Walled Garden’ architecture is more expensive than using BlackBerry Enterprise Server with BlackBerry smartphones,” said Andrew Brown, Director of Enterprise Research at Strategy Analytics.

“When looking to define a cost-efficient, long-term enterprise mobility strategy, we would caution all organisations across both the public and private sectors to look at the total cost of supporting multiple devices with multiple operating systems over several years.”

Government organisations looking to use this evidence as ammunition to support a push for BlackBerry devices should think twice, however: with the growing adoption of bring your own device (BYOD) policies within organisations of all types, users – who have been generally abandoning personal BlackBerry smartphones for iOS and Android-based alternatives – may be reluctant to have BlackBerrys pressed on them, no matter how inexpensive they are for the department.

BYOD has quickly become an area of major concern for government and non-government organisations alike, with many users simply bringing their personal devices into the workplace and using them regardless of any formal BYOD policy.

A new survey by research firm Ovum found that nearly 80 percent of BYOD activity remains inadequately unmanaged by IT departments, even though 70 percent of all smartphone-owning professionals are using their personal devices to access corporate data.

Nearly half of respondents to the Ovum survey said they didn't know what BYOD was or were ignoring its existence, but only 8.1 percent had actively discouraged its use by employees.

“Despite much speculation, BYOD is here to stay," said Ovum senior analyst Richard Absalom in a statement. "Therefore, it’s worrying to see evidence of such a high proportion of businesses burying their head in the sand when it comes to planning adequately for it."

"BYOD multiplies the number of networks, applications, and end-points through which data is accessed. These are the three main points at which data is vulnerable; so, if left unmanaged, BYOD creates a huge data security risk.”

Scroll down to view Strategy Analytics' security assessments of each platform. – David Braue 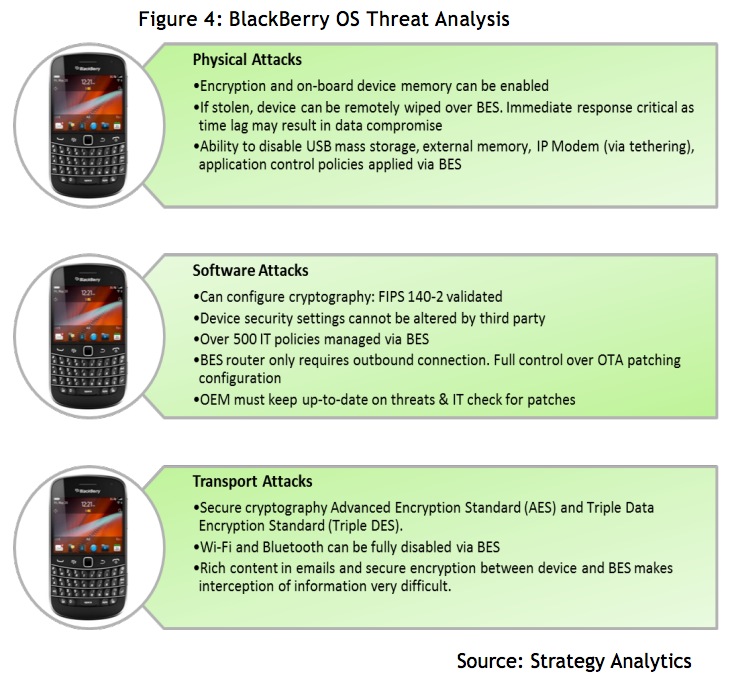 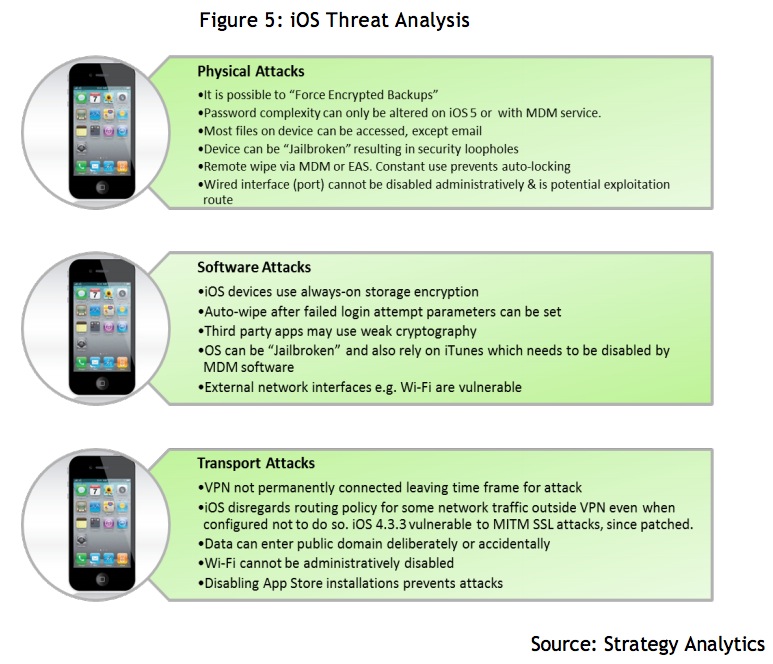 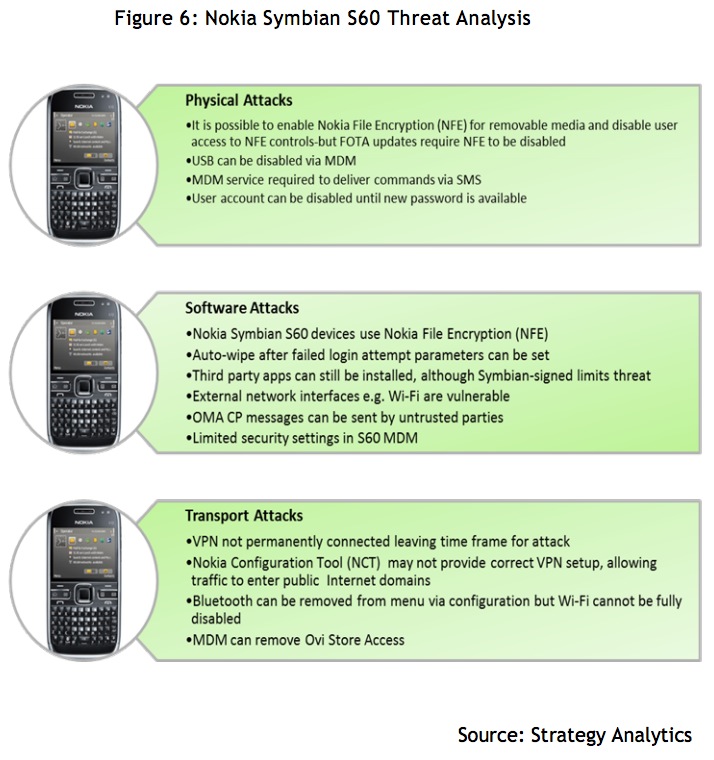 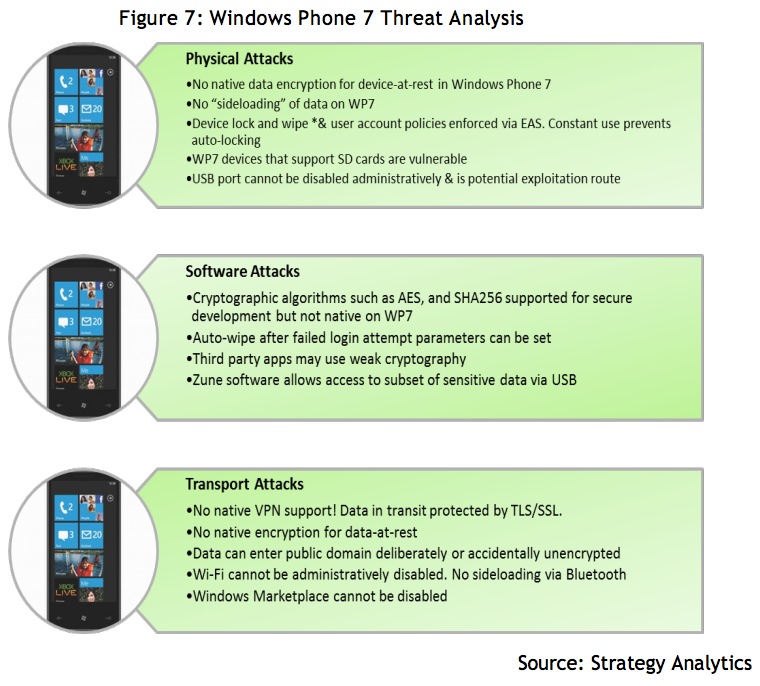 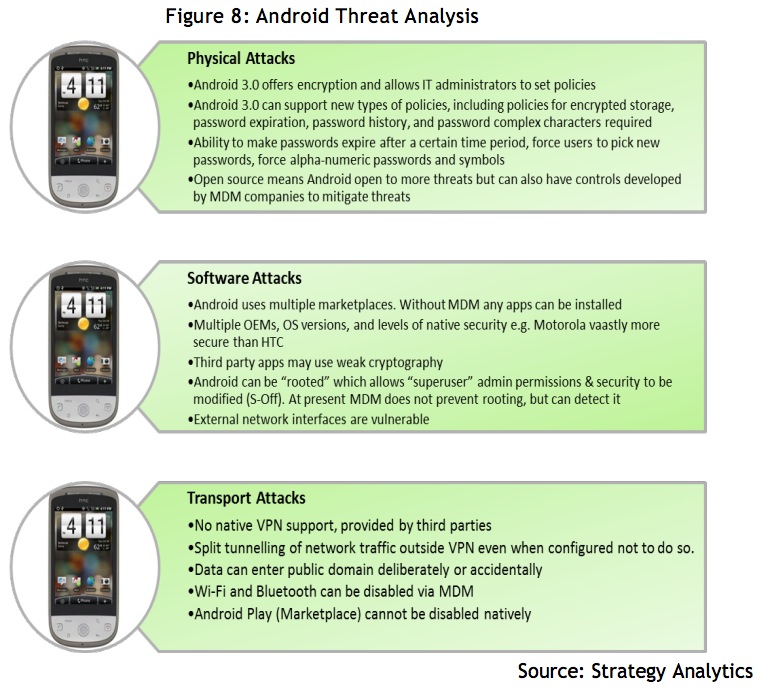