Government organisations are among the highest users of high-risk applications that could compromise network security and pave the way for hacking attacks, recent figures from security firm Check Point Software Technologies have found.

Government organisations had the highest or second-highest usage rates for all four technologies measured, in some cases far exceeding usage rates in industries such as the risk-averse consulting industry. 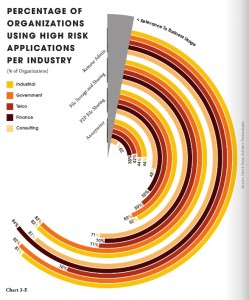 For example, 44% of government organisations were using anonymiser traffic compared with just 29% of consulting companies, with Tor (23%) the most popular application and CGI-Proxy (13%), Ultrasurf (8%), Hopster (7%), Hide My Ass (7%), and Hamachi (6%) filling out the top six.

By contrast, 63% of government organisations – the highest of any industry – were using P2P tools and just 48% of consulting companies were using P2P software.

BitTorrent was the most popular P2P tool, used in 40% of environments, while eMule (20%), SoulSeek (19%), and Gnutella (11%), and Sopcast (10%) were also common. Asia-Pacific organisations were far heavier users of P2P tools, with 72% of surveyed organisations using the tools while just 62% of Americas and 55% of EMEA organisations were using them.

The gap was even wider when it came to use of file storage and sharing tools – for example, the cloud-based Dropbox and its ilk. Fully 82% of government and industrial organisations were using such tools, compared with 71% of consulting and telco companies, and 70% of finance firms.

Dropbox had caused two major security incidents in two years, Check Point pointed out, noting that company vulnerabilities had exposed files to anyone via the Web. For the growing number of government employees relying on the tool to manage sensitive files, this was tantamount to making confidential information available to anybody.

The only category where government wasn’t at the vanguard of usage was in use of remote administration tools, where it ranked second (with 82% penetration) – slightly behind finance companies (84%) and well ahead of telcos (76%).

Such tools have been exploited by hackers in the past, as in the ‘Nitro’ attack in which attackers used an off-the-shelf hacker tool called Poison Ivy to infect Windows PCs through a tainted email attachment. Some 48 firms were attacked, with 29 of them succumbing to the vulnerability – which allowed the attackers to remotely take control of company computers and siphon off critical information. – David Braue