A technology training hothouse and live service-delivery centre in the regional Victorian city of Ballarat has proven so successful for IBM and the University of Ballarat that the City of Ballarat is counting on a major expansion of the venture as a key driver for future economic growth.

The Ballarat Technology Park (BTP) was established in 1994 as a site for a data centre to support IBM Australia’s domestic operations. In 2000 it began following IBM’s incursion into the exploding business process outsourcing (BPO) market, and in the intervening years the site has become a hotbed of development and support initiatives – with over 1000 employees providing 24x7 technology and customer support for 30 different IBM corporate customers.

Co-locating the site with the University of Ballarat’s campus has helped the facility become a natural channel for technology and business students, who can gain on-the-job skills supporting blue-chip IBM clients including Qantas, Jetstar, Fiserv, NBN Co, the Australian Bureau of Statistics (ABS), and others. IBM, for its part, gets extra skilled staff to better manage peaks and troughs in demand for support.

The popular Earn As You Learn (EAYL) program is targeted at students pursuing a Bachelor of IT – Professional Practice degree, during which they spend second, third and fourth years in on-the-job employment with IBM at the site.

Fully 80 percent of graduates from the centre end up working for IBM, giving them opportunities for career development within Ballarat or within an entirely different direction within IBM’s Australian or overseas operations.

“It is really hard to ramp up with smart talent and skilled labour,” strategy and innovation head Ben Tulloch explains. “University training is quite structured and context specific, but business training is about outcomes, context, and nuances.” 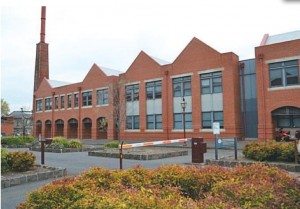 Set to open next year, this building will expand the Ballarat Technology Park into the city's CBD.

“Here we can give students the best of both worlds: they get theory and context in the classroom, and situational, on-the-job learning through practice. We have a ready supply of talent, and they’re ready and keen to work, It’s a win-win environment to get them across.”

The model has proved so successful that IBM announced earlier this year it would replicate the facility in New Zealand. But it is the planned expansion of the site – across 22 hectares of land earmarked for the construction of 11 separate buildings in the next decade – that will significantly expand the capabilities of the centre and bring new opportunity to the Ballarat economy.

Creation of new job opportunities has become a shining light of opportunity in a region that was sent reeling in 2008, when 1900 manufacturing jobs left the town during the economic devastation of the global financial crisis. The planned expansion will include accommodation for another 1500 employees, and generate an additional $400m in annual economic outputs.

The partnership with IBM has helped the city reassert its position as a financial and service hub across regional Victoria, with the planned expansion to target IT, biotechnology and renewable-energy ventures.

“We see ourselves as the service delivery hub of western Victoria,” Jeff Pulford, executive director for destination and economy with the City of Ballarat, told GTR. “An issue that regional centres have is how you go about providing career paths that are going to be meaningful – and for us, IBM is a central part of the story.

“This centre has shown that you don’t have to go to Melbourne to get a great job in a multinational organisation that can get you on a career path to go around the world. We have a university generating highly skilled graduates who are able to come and get a real career pathway.”

A grant of around $3m from the state government will cover the cost of refurbishing a landmark CBD building and building supporting infrastructure for the expansion at University of Ballarat's Mt Helen campus, which will strengthen the number of skilled staff coming through the Ballarat Delivery Centre and support potential new regional customers such as a planned $60m integrated cancer care centre.

Asked why the Ballarat facility – the largest of its kind in Australia – has been so successful, Tulloch said the answer was clear: ”it’s all about having a vision,” he explained, “and managing relationships with the state government, the University of Ballarat, and the City of Ballarat.

“We’ve been lucky to have had people within the university that understand how it works, and have been proactive to put skin in the game.” – David Braue

Ensuring first responders have the best communications technologies will be the focus of...

The federal government has announced a new approach to technology procurement that will...

US state CIOs rocked by COVID-19

US state CIOs faced significant disruption as a result of COVID-19 but managed to respond with...

The case for cloud networking in government

Student Voices winner: the impact of lockdown and closures

Tune in to the ARCIA industry awards