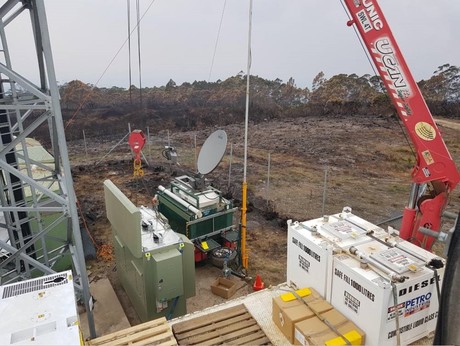 The NSW Telco Authority found itself in the thick of battle during the recent bushfires.

During this summer’s awful bushfires, firefighters — both volunteer and professional — along with numerous other emergency personnel, utilities crews, council employees and many others, have worked tirelessly over many months to tackle the crisis. And many of those personnel have worked almost continuously during that period.

Unseen in the background, others too have been working to provide and maintain essential services to those frontline crews and, by extension, the wider public.

That dedication is exemplified by the NSW Telco Authority, whose Network Operations team and Telecommunications Emergency Management Unit had provided 150 continuous days (as of early February) of 24-hour emergency coordination of telecommunications support for the bushfire operations, including having liaison officers based at Rural Fire Service headquarters when required.

The support has been vital in assisting the NSW Rural Fire Service, Fire and Rescue NSW, NSW Ambulance, NSW Police and the State Emergency Service perform their roles.

The Authority is responsible for managing the Government Radio Network (GRN), the primary network for NSW government agencies and emergency services organisations that use mobile radio communications.

The GRN provides the essential link between headquarters and firefighters on the ground, in all corners of NSW, supporting everything from firefighting to air operations, ambulance response and other emergency services tasking.

“Next to Triple Zero, this is the most important emergency communications network in NSW,” said the Authority’s Managing Director, Kylie De Courteney.

The tower at Mt Wandera. Burnt cables can be seen running all the way up the tower.

The Authority has worked closely with agencies to protect radio communications towers throughout the crisis, some of which were damaged by the fires.

“It was vital to get the Government Radio Network communications back up for firefighters so fleets on the ground and in the air can continue to coordinate operations, response and recovery,” she said.

Where network infrastructure was damaged by the fires, the Authority rapidly deployed a series of ‘cell on wheels’ (COWs) portable base stations.

A cell on wheels staged, ready for action.

“After two Government Radio Network sites at Mt Wanderer and Batemans Bay were destroyed in the fires, we immediately deployed COWs to provide temporary radio communications at these sites, including working with the Australian Defence Force to airlift equipment from Coffs Harbour to Cooma,” De Courteney said.

The Authority’s bushfire support efforts also included restoring or expanded critical communications where existing infrastructure had been destroyed or where mains power supply was not available.

The CCEP site at Mt Ganghat on the NSW north coast. A satellite solution was installed to enhance communications.

More than 20 portable generators were pressed into service to ensure electricity could be maintained where mains power had been affected, and many were put on standby for deployment into areas identified as being at risk from the fires.

As well as restoring communications, the Authority proactively put portable generators on standby, readied capacity expansion kits to manage radio congestion, and stationed four COWs at sites identified as being at risk of being affected by the fires.

“The sites were made operational using temporary satellite infrastructure, to provide essential and enhanced radio communications coverage for emergency services.”

NSW Telco backhaul architects also designed a satellite solution and installed it into portable pelican-style cases. The system used Kymeta satellite panels, which — unlike a typical dish that must be physically aligned to a satellite — are electronically steered and enable rapid deployments.

The Authority also worked with carriers to fix damaged infrastructure to restore essential services such as internet access, mobile phone coverage and electricity for hospitals, businesses, volunteer organisations and other services.

Top image: The Mt Budawang repeater site was burned, so a COW was deployed to provide coverage. Then for a longer term solution, an ICS outdoor P25 cabinet was installed. All images courtesy NSW Telco Authority.

IX Australia and Extreme have partnered to deliver 100 GB peering for internet services and content.

As the US Department of Defense adopts ethical principles for the use of AI by the military,...

Australia's delegation to the WRC-19 focused on advancing the nation's legitimate...

New $345 million hospital in the heart of Adelaide

Nursing on the COVID-19 frontline