Early experimentation in social media – and a pervasive sense of restraint because of its potential to get out of control – has given way to a new generation of social media-enabled government organisations. These organisations are actively, successfully and without hesitation using the pantheon of social-media services – not only Facebook and Twitter but the likes of Instagram, LinkedIn, Google+, and other more specialised services – to forge new relationships with their citizens.

These successes were the focus of GTR's recent Social Media for the Public Sector conference, held in Melbourne in May alongside the companion Government Mobility and App Solutions conference, where hundreds of delegates joined to share their experiences implementing social media policies and often-related mobile services and applications across their organisations.

A wealth of strong results was on display, with the likes of Cancer Council Victoria and the City of Joondalup to Moreland City Council, the CSIRO Climate Adaptation Flagship, Wyndham City Council and others sharing their very interesting stories.

With so many enervating and fascinating case studies on offer, Commstrat felt it was appropriate to recognise so much innovation with an awards program that would recognise the best uses of social media to further the policy and engagement objectives of public-sector organisations.

There were numerous entries to the inaugural GTR Social Media Innovation Award, with four organisations – Redland City Council, the Department of Immigration and Border Protection, Bureau of Meterology and Airservices Australia – chosen as finalists for successfully completing social-media campaigns that were both innovative and effective.

While all delivered social-media innovation, the Bureau of Meteorology was chosen as the winner because of its success in building a social-media context around its core mission and engaging citizens on an ongoing basis; in this way, the BoM’s social-media investment has truly helped transform the delivery of the organisation’s core message and services. 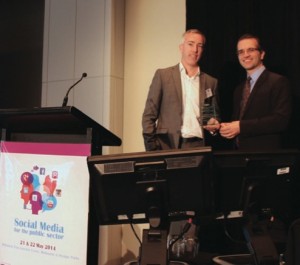 GTR editor David Braue has interviewed all four finalists in videos that are being published online through the GTR Knowledge Series, an ongoing and free series of interviews with public-sector policy leaders that are filled with insight and available for viewing online at any time.

In those interviews, the finalists share their experiences and lessons learned around projects that were each novel and valuable in their own way. The four finalists included:

DEPARTMENT OF IMMIGRATION AND BORDER PROTECTION

The Department of Immigration and Border Protection's (DIBP's) Live the Life Australia campaign ran from 23 November 2013 to 1 March 2014, seeking to raise awareness of Australian skilled visas, encourage overseas skilled workers to consider Australia as a career destination, and direct them to the SkillSelect fast-track program for migrating to Australia.

Australia will offer some 190,000 places for skilled workers this year, and skilled workers were targeted in established labour markets like the UK, Ireland, China and India as well as emerging potential markets such as the USA, Philippines, Malaysia and Singapore. By building the campaign around survey results confirming that most foreign workers are attracted to Australia for lifestyle reasons, the campaign incorporated a range of elements including the #LifethelifeAus hashtag, an animated video series that was produced in English and Mandarin, and relevant content that was developed and offered through a partnership with Tourism Australia. 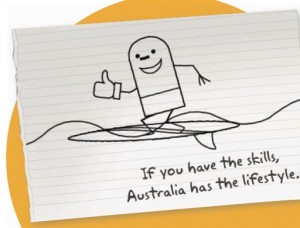 Results were strong, with the animated videos performing extremely well: one video, about the career prospects for architects in Australia, was viewed by 659,712 unique users and liked 1391 times. The animated videos registered a 7 to 21 percent organic reach and average of 6.3 percent engagement.

The agency began the program hoping to boost page views for the SkillSelect and Work In Australia Web pages by up to 15 percent. By the time the campaign was finished, DIBP had exceeded its targets, increasing Work In Australia page views by 30.01 percent, with 80,581 average weekly views.

The annual 'Airservices tracks Santa' campaign has been running for seven years already, but each year the organisation has broadened its scope by building out its online presence and, most recently, tapping into social media to expand the scope and effectiveness of its outreach efforts.

The campaign runs in the leadup to Christmas and is centred around the idea that Airservices Australia is working with Santa to co-ordinate his travels through Australian airspace. The campaign included a dedicated Santa Web site, a dedicated YouTube channel called AirservicesTV, and a Facebook page that was monitored on an ongoing basis by staff to maximise engagement.

Visitors were engaged through a number of methods, including a Catch the Reindeer game that was offered as an app for both iOS and Android users. Videos of Santa's flight path were also offered, with Airservices staff featuring in the videos working with Santa to finalise his flight path. Online and video content were interspersed with historical information about the role of air traffic controllers and their importance in everyday travel.

Airservices most recently began using the social presence as a recruitment tool, with the addition of a number of videos that provided a look into the day-to-day activities of air traffic controllers and information for new recruits. The four recruitment videos were watched more than 4000 times, with thousands of new hits to the organisation's careers page over the course of the month-long campaign.

Metrics confirm the effectiveness of the organisation's social-media efforts: the month of December 2013 saw 274,000 hits to the Airservices Web site, up from 90,000 during the same month a year earlier. Visitors to the site peaked on Christmas Eve with around 60,000 visits, up from 45,000 a year earlier. – David Braue

This story originally appeared in the May/June 2014 issue of Government Technology Review.