Estimates vary as to Australia’s population growth by 2050, but the most reliable source, the 2010 Intergenerational Report, pins it at around 39.5 million people, up from 29.4 million in 2008. The crux of the matter is that all those people will have to live somewhere, and although various levels of government are trying to siphon growing urban populations into infill developments, the overwhelming number of new domestic building is still detached houses - in 2008/09, detached houses made up 71 per cent of all new building approvals, the majority of them on greenfield sites surrounding major urban centres.

In the past these greenfield sites would have utilities supplied at around the time that building started. Telecommunications was no different. Telstra, because of its universal service obligation, would provide copper to the premises, at a cost to Telstra of around $800 per dwelling. 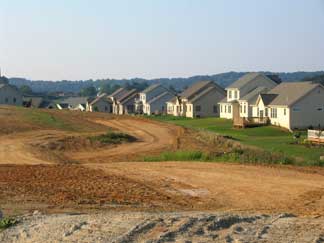 That all changed on July 1, when the federal government mandated that greenfield developments must have fibre, in place of copper, installed in preparation for the National Broadband Network fibre rollout. Effectively it became illegal to install copper into a new development.

This created problems because Telstra estimated the cost of installing fibre to the premises in new developments, including the charge to “pit and trench” the fibre, at around $3500 per dwelling. It also elected to pass this cost directly on to developers, causing an uproar amongst the property developer community.

“For a developer the situation changed from yesterday it not costing anything to have telecommunications installed, to today where it would have cost $3500,” said Mr Wolfe.

Naturally developers would look to pass this cost onto the ultimate buyer of the home, but in doing so the cost would escalate because of holding charges – that is, the amount of money that the develop had to outlay to have the fibre installed, plus their expenses incurred while doing so.

Mr Wolfe told Government Technology Review that this situation created an inequity between new greenfield developments, and the rest of the nation which would, effectively, have fibre rolled out for “free” by the National Broadband Network Company.

(As an aside, the NBN Co. has said that it will provide services via a mix of “pit and trench”, overhead cable along the lines of the contentious HFC pay TV rollout of the early nineties, and wireless and satellite in remote areas where rolling out fibre is not an economic proposition.)

Developers effectively have said that they should not have to pay to install fibre when the rest of the country is getting it for nothing. This created a stalemate that wasn’t helped by the fact that at the time Telstra’s role within the NBN was unclear – the government, at the time, had said that it would go alone with the NBN, ignoring Telstra, unless it could come to some agreement with the telco giant.

Telstra, prior to any agreement with the federal government, said as a matter of conciliation it would pit and trench new estates, but leave the infrastructure virgin - that is, without any copper or fibre being pulled through them at all. “We didn’t want to hold up developments in greenfield sites,” an insider told Government Technology Review, “so we agreed to put in the pits and trenches, as we would have done for copper, and then left them so that anyone else, including NBN Co., could pull the fibre through.”

In the end, that situation wasn’t necessary because Telstra reached a landmark agreement with the then Rudd government on June 20 of this year. That heads of agreement would see NBN Co. use some of Telstra’s existing infrastructure in place of rolling out virgin fibre. Telstra would receive payment that would equate to a post-tax value of around $11 billion, which included the cost of decommissioning copper and the HFC system, use of Telstra’s fibre infrastructure, and the value to Telstra of avoiding its universal service obligations.

However that still left the greenfield development question in play, a situation that hasn’t been resolved 100 per cent at the time of writing.

In response to questions from Government Technology Review, Telstra provided a statement, saying that “The Government’s Greenfields policy change will have a significant impact on the way infrastructure is provided in new estates and we’re working with the Government, NBN Co. and developers to ensure a smooth transition to the new arrangements.”

These new arrangements, while complicated, provide some clarity for greenfield developers. Effectively, housing developers will pay to pit and trench the new estates, while the NBN Co. will become the wholesale provider of services of last resort for those estates.

Developers can approach private contractors to pull the cable through the pits and trenches in the new estates, or they can wait for NBN Co. to do it for them. Telstra no longer has the obligation to provide services within those estates with the exception of a basic telephone service, and commercial providers can bid to provide those same services, obtained from NBN Co. at wholesale prices, for the greenfied estates. NBN Co.. also reserves the option to pay commercial providers to pull cable through the pit and trenches, but again this will be at zero cost to home-owners and greenfield developers and ownership of that infrastructure will pass to NBN Co. when the development is finished.

It’s also important to note that any fibre pulled through new estates must comply with the core technical specifications set out by NBN Co.

This situation hasn’t left everyone – especially the Housing Industry Association – completely happy. “In many ways it’s a disappointing result,” said HIA chief Graham Wolfe. “It still leaves people that buy new houses out of pocket because of the pit and trench charges that developers will have to levy on providing new services to new estates.”

Mr Wolfe said that buyers of new houses will come off second best because the infrastructure costs for new estates will be added onto the cost of that new house. “There are already shortages of housing supplies in Australia, and buyers of new houses, under this arrangement, will come off second best,” he said. “They will have to pay more for services than people who buy an existing property.

“It’s disappointing,” he continued, “because the people that will really suffer are the consumers of new housing developments.”

Also unhappy with the current arrangements are existing network wholesale providers, who see the NBN Co.’s commitment to being the wholesaler of “last resort” as essentially a move that will see NBN Co. competing with them for business. Several had already applied for carrier licenses, which would have seen them able to provide infrastructure.

There are any number of applications for AI across industry sectors, but the role of AI in the...

As the Australian Government continues the next phases of vaccine delivery, it has been faced...

Australians ageing up to nine years faster than they should be