In shadow of NSA, Obama calls for innovation and action

The year 2014 “can be a breakthrough year for America”, US president Barack Obama has promised in his latest annual State of the Union Address, a far-reaching update on the country's progress and direction that was delivered in the shadow of ongoing concerns about mass data collection by US government authorities.

Obama only obliquely referenced the National Security Agency's (NSA's) program of surveillance, which has been scraping and collecting massive volumes of data about telephone conversations, Internet usage and even mobile apps with the goal of proactively identifying potential terrorists.

“Here at home, we'll keep strengthening our defenses, and combat new threats like cyberattacks,” he said, noting that America “must move off a permanent war footing.” 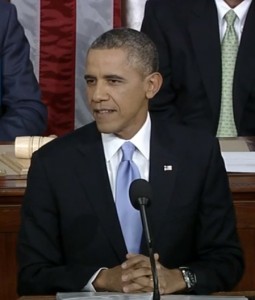 “That's why, working with this Congress, I will reform our surveillance programs – because the vital work of our intelligence community depends on public confidence, here and abroad, that the privacy of ordinary people is not being violated.”

The United States government's phone surveillance activities are legal, a recent ruling by a US appeals court has found in reversing an earlier ruling that the activities – exposed last year by ex-National Security Agency employee Edward Snowden – were unconstitutional.

The NSA, in a massive program of phone records collection and analysis, has been collecting billions of Americans' phone records to feed cross-matching engines designed to identify potential persons of interest in anti-terrorism and other investigations.

Its constitutionality has been fiercely debated in the country, but the latest ruling paves the way for continued surveillance that will be tempered with controls and transparency.

For example, the US government recently allowed technology companies like Apple, Facebook and Google to reveal more information about the requests it lodges with them for information about online individuals. Last month, an official panel completed a review of the NSA's surveillance program with over 40 recommendations to kerb and improve its activities.

“In a world of complex threats, our security and leadership depends on all elements of our power,” Obama said, “including strong and principled diplomacy.... We counter terrorism not just through intelligence and military action, but by remaining true to our Constitutional ideals, and setting an example for the rest of the world.”

Obama also spoke about the need for the government to encourage growth through innovation, which he urged congressional leaders to help support through favourable legislations and government programs: “We know that the nation that goes all-in on innovation today will own the global economy tomorrow,” Obama said.

“This is an edge America cannot surrender. Federally-funded research helped lead to the ideas and inventions behind Google and smartphones,” he continued, pushing for greater governmental support for technology innovation and patent-reform legislation “that allows our businesses to stay focused on innovation, not costly, needless litigation.” – David Braue