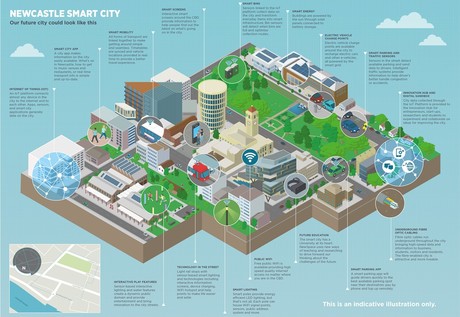 The smart city strategy was first unveiled in May and placed on public exhibition through to July. Based on feedback received during this period, the strategy has been augmented with new approaches to water management and a greater emphasis on public safety.

This new strategy has now been endorsed by the council. The strategy consists of a four-year blueprint based on six key areas — smart economy, smart environment, smart living, smart mobility, smart people and smart governance.

As part of the strategy, the council plans to develop an IoT platform connecting nearly every device in the city to the internet and each other.

Data collected from this platform will be provided to a new Innovation Hub for use by entrepreneurs, researchers, start-ups and students.

Other planned initiatives will include a smart city app and interactive smart screens in the CBD to provide information on the city to the public; and smart bins using sensors to detect when bins need emptying.

“I’m delighted to say the city now has a community-informed, council-endorsed blueprint to follow as we reinvent the local economy and make the city a centre of innovation,” Newcastle City Council interim CEO Jeremy Bath said.

“Actions will now be implemented across council and be integrated into relevant work programs and operational plans. For new programs and projects, funding will be sought through the usual budget processes or through external grant funding when available.”

Mitigating the impact of inflation on IT: Gartner