On the big screen 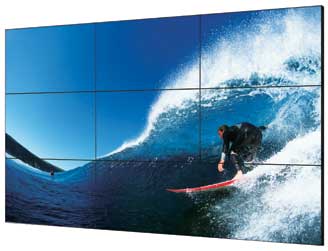 Big is beautiful when it comes to displays, but Adam Turner explains that screen inches aren’t just about bragging rights: choosing the right monitors, projectors and digital signage for your organisation can enhance productivity and significantly improve communication with stakeholders.

In an age when we’re constantly surrounded by screens, it’s easy to become complacent when deploying displays across your organisation. The rise of cheap consumer-grade displays might be great for homemakers prone to impulse purchases, but not all screens are created equal.

A successful rollout of monitors, projectors and digital signage throughout your organisation requires the same planning and management as any other significant IT project. It can also offer significant returns. A few extra inches on the desktop can offer a major productivity boost, as can a well-designed meeting room. Meanwhile digital signage can significantly enhance services offered in a retail environment.

Large monitors aren’t just about bragging rights: several studies have shown a correlation between screen size and productivity. Workers using 24-inch monitors complete tasks 52 per cent faster than those using 18-inch monitors, according to research by the University of Utah – funded by NEC and cited in the Wall Street Journal.

“Information workers are expected to juggle tasks,” Hayler says. “For example, using a word processor while jumping between their email client, instant messaging and a web browser. A larger screen eliminates the need to flick between them, which is obviously a time-saver.”

A 22-inch widescreen monitor is large enough to view and edit two A4 documents side-by-side. Monitors of this size tend to offer a native resolution of 1920x1200.

“The higher resolutions are obviously important to those working with graphics or multimedia,” Hayler says. “Even if you don’t need that kind of detail, the extra screen real estate allows the use of larger fonts - to reduce eye strain - while still offering plenty of space to work in.”

There are also health and safety features to consider. An adjustable stand lets users raise the display to the correct height to reduce neck strain. Also look for tilt and swivel options, including the ability to turn the monitor 90 degrees from landscape to portrait mode. Most monitors should feature Video Electronics Standards Association (VESA) standard mounting points on the rear, for mounting them on a wall or monitor arm.

Choosing the right audio visual technology for an office environment covers not just desks but also meeting rooms and the boardroom.

You might want to look to higher resolutions such as 1680x1050 or 1920x1200 if you require fine detail, such as projecting maps, plans or schematics. High-resolution 1920x1200 projectors can be costly but should become more affordable this year.

Brightness is another factor to consider. A high brightness rating, measured in American National Standards Institute (ANSI) lumens is particularly important if you won’t be dimming the lights or if you require the audience to see fine detail. If you’ll be projecting on a wall rather than a screen, you’ll also need a brighter projector to compensate. Be warned, the trade-off for higher brightness is often noise and heat.

“Whiteboard take-up was traditionally driven by the education market, but it’s making an impact in the boardroom,” Moffat says.

“New models let you use your finger or a stylus to interact with the display and we’re even seeing multi-touch, gesture-driven controls. Now we’re starting to get into annotation tablets as well, letting all the meeting’s participants draw on the screen.”

There’s a push to keep clutter off the boardroom table, using wireless links to connect notebooks to projectors. Such set ups make it easy to switch between notebooks during multi-speaker presentations, generally requiring a passcode to connect.

Wireless links are only one part of the wider control system – the “magic box” which lies at the heart of a meeting room AV system. This is the secret source of a successful meeting room, Moffat says.

“Many clients don’t appreciate that it’s worth spending the money on a good control centre,” he says. “This covers connecting devices, switching between audio and video sources, controlling the lights and blinds and operating the video conferencing system – all important elements of an efficient meeting.”

“The challenge with meeting spaces is designing an AV system so someone can walk in and use it without any training. The world’s greatest meeting room isn’t much use if your staff can’t use it effectively.”

The productivity benefits offered by display technologies aren’t just restricted to the office. Attention is turning to the effective use of digital signage to significantly enhance services offered in a customer-facing environment.

Digital signage is an effective way to convey up-to-date information to customers in a retail space. An enterprise-grade digital signage system comprises three key components – the screens and player, the backend control/content management system and the actual content. Screens can feature built-in media players, or they can be separate boxes.

One of the most effective uses of digital signage is in combination with a ticketing system, to notify customers when it’s their turn to be served, says Chris Panzetta, Managing Director of digital signage system integrator Be Digital.

“Integrating a ticking system with digital signage can reduce perceived waiting time, unlike when people are standing in a queue,” says Panzetta.

“The extra benefit of such a system is that people are regularly looking at the screen, so you have a captive audience. This makes it easier to communicate useful information, for example new rules or changes to procedures. The great thing about digital signage is that it’s captivating but not invasive and it doesn’t require any technology on the end users’ part.”

It’s important to use commercial-grade panels which people can read clearly, Panzetta says, rather than cutting costs with consumer-grade televisions and monitors.

“I think it pays to go with an established platform,” Panzetta says. “A lot of systems are web-based and claim to be scalable, but unless it’s been tested and deployed on thousands of screens I’d be very wary about partnering with them.”

“You want a system that can cater to your organisational structure. Management of roles doesn’t receive much attention but is one of the most important issues. If a local manager wants to update content, you need to be sure it doesn’t have implications for the wider system. Quality control becomes an important issue.”

As with any major IT project, start with considering your business objectives rather than focusing on technical issues up front.

“Don’t start by wondering about how big your digital signs will be,” Panzetta says. “If you start with your goal and work backwards, most of the other technical questions answer themselves.”