The Commonwealth government will promote the use of telework as a workplace strategy by pushing its own agencies towards a target of 12% teleworking penetration by 2020, prime minister Julia Gillard announced this morning.

Speaking via teleconference to the Telework Congress conference in Melbourne, Gillard said the government as a big employer “has an opportunity and a responsibility to show some leadership here….I believe we can be demonstrating the range of options.”

Arguing that teleworking is about much more than reducing workers’ commuting time, Gillard said agencies must focus on the opportunities for technologies such as teleconferencing to help increase the participation of workers who have traditionally been disenfranchised by physical work structures. 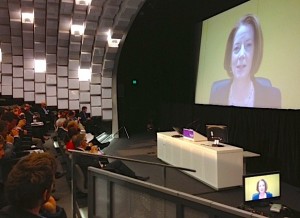 Kicking off National Telework Week, which runs through Friday, Gillard also launched a report from Deloitte Access Economics and Colmar Brunton that found:

Bill Shorten, the minister for employment and workplace relations, echoed this theme: “Telework offers the opportunity to include people that don’t always get to be included,” he said, noting that workplace participation amongst mothers is just around 55%.

“It gives them the ability to make a partial re-engagement in the workforce as per where they are in their lives. It means we don’t lose over the cliff of retirement, the skills that people have to provide to the rest of us.

“The other thing we have is people with disabilities,” Shorten added, “where the unemployment rate is ridiculously high. I ask why would we want to put into exile literally hundreds of thousands of people with significant impairment and say that they deserve a second-class outcome?”

“When the mineral prices eventually come down, we’re going to need our people.” – David Braue

Ensuring first responders have the best communications technologies will be the focus of...

The federal government has announced a new approach to technology procurement that will...

The case for cloud networking in government

Australian cybersecurity market worth $5.6bn in 2020