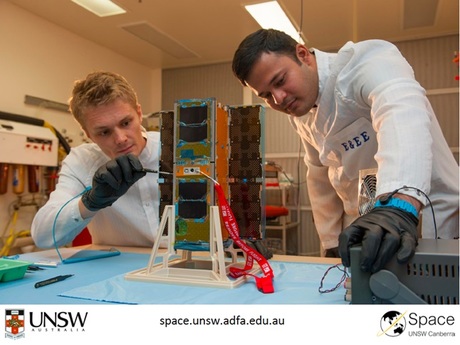 Space engineers from UNSW Canberra have developed a miniature satellite, called a CubeSat, that will help to more accurately predict the orbits of space objects.

The satellite has passed a range of challenging tests that simulate the harsh environment of space and will play an important role in developing Australian Defence space capability. It has gone through 24/7 thermal cycling with the help of spacecraft test engineers from the Australian National University at the Advanced Instrumentation Technology Centre.

“The CubeSat that we tested is the first of two in a joint program called Buccaneer to build Australian capability to develop and fly satellite missions,” said Professor Russell Boyce, director of UNSW Canberra Space.

“Satellites and space debris move around erratically due to space weather and atmospheric drag, even at high altitudes. These movements are not well understood and so are very hard to predict, and are a major reason why collisions in space are a serious risk,” said Boyce.

“Being able to avoid collisions in space is essential if we are to safeguard the space-based technologies upon which the world depends.”

According to the engineers, Buccaneer is a stepping stone to an increasingly sophisticated Australian space capability that can take advantage of rapidly transforming technology and a boom in the Asia–Pacific space sector.

“These will lead to new ways to inexpensively perform remote sensing — for example, for environmental monitoring, national security and much more — and improve communication links,” he said.

UNSW Canberra has made a $10 million strategic investment to build a domestic space program, which includes assembling a team of space engineers and scientists.

“UNSW Canberra is playing a key role in the transformation of space technology and helping Australia to become an important space-faring nation, in ways that make economic sense and meet national needs,” said Frater.