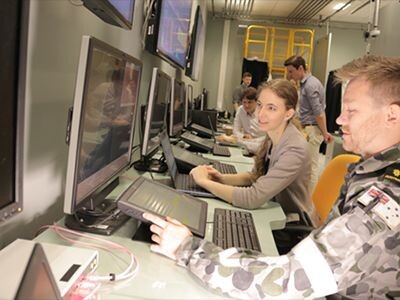 A cyber researcher with the Department of Defence, Amy Stringfellow, has been awarded the ADM Women in Defence ‘Rising Star’ award for her achievements in Defence science. Stringfellow is researching and developing next-generation technologies that will enable the Australian Defence Force to execute missions in contested cyber environments.

Stringfellow states that the work program is aimed at informing decision-making, and providing military commanders with a clear, timely understanding of their cyber dependencies and how that impacts their missions.

“By automatically mapping mission-critical workflows undertaken by warfighters to the underlying cyber assets, commanders and their network defenders can prioritise the defence of their networks and systems,” Stringfellow said.

One of the company’s breakthroughs is a proof-of-concept experimental system that uses emails, chat logs and working documents to identify and chart complex military processes without human assistance. This is a critical capability for automatically identifying how military emissions depend on critical cyber resources.

Stringfellow conceived and co-authored the machine-assisted web-based application that enabled the rapid labelling of a large body of military natural language documents, producing datasets that were essential for training and testing the team’s machine learning algorithms. Stringfellow also researched, coded and conducted experiments on machine learning pipelines used to analyse the data.

Stringfellow and her team are also working with cyber experts from the Naval Research Laboratory (NRL) in Washington, DC, the Massachusetts Institute of Technology Lincoln Laboratories (MIT LL) in Boston and US Indo-Pacific Command in Hawaii.

“It’s not very common when you first start working to have that level of international engagement. It’s been really eye-opening and really interesting,” Stringfellow said.

Stringfellow described the Rising Star award as “greatly inspiring”, and emphasised that it was a team effort.

“It’s really nice for the work of the team to be recognised. It’s all about what we’ve managed to achieve together,” Stringfellow said.

SA Water, in partnership with the Stone & Chalk start-up hub at Lot Fourteen, will use...

70% of customer service and support employees would prefer to continue working from home after...

The Defence Science and Technology Group has outlined a methodology for AI project managers and...