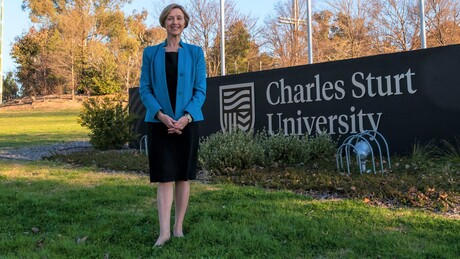 Leon will assume her new role on Wednesday, 1 September 2021, and will be based at the University’s Bathurst campus.

Charles Sturt Chancellor Dr Michele Allan said: “Renée strongly believes in the benefits of higher education and in particular the critical role that Charles Sturt University plays in the regional communities that it serves.

“She has demonstrated her skills in effectively running large and complex organisations with multiple stakeholders and is the right person to lead Charles Sturt University into the next stage of our development.”

Leon said, “Regional universities contribute hugely to regional development and sustainability, and it is exciting to join Charles Sturt University at a time when regional Australia is growing and evolving.

“I’m looking forward to working with an academic team who is committed to the development of the university to meet the challenges ahead.”

Leon was awarded a Public Service Medal in 2013 for outstanding service to public administration and law in leadership roles in the Australian Capital Territory and the Commonwealth.

She is a Fellow of the Institute of Public Administration Australia, an Adjunct Professor at the University of Canberra and a member of Chief Executive Women Australia.

Interim Vice-Chancellor Professor John Germov will return to his substantive role as Provost and Deputy Vice-Chancellor (Academic) and will remain a key member of the university leadership team.

“Professor Germov has played a critical role in leading the university through a challenging period,” Dr Allan said.