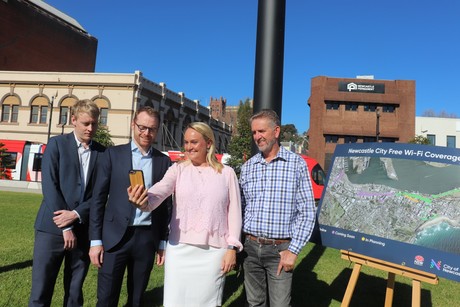 Newcastle has become the latest city to launch a free public Wi-Fi network in a bid to increase connectivity and information sharing between the community, businesses and the digital world.

It follows a slew of other cities worldwide, including Kansas, New York, Tel Aviv, Helsinki, Perth and Macau, which have all installed free public Wi-Fi as part of their modernisation into smart cities.

Now, people in Newcastle can connect to 60 of the city’s 150 smart poles on their smart devices when they log on around Wharf Road, Watt Street and Shortland Esplanade.

Plans are in place to install additional poles across the city, as well as Beresfield, Wickham and Wallsend, in the near future.

Lord Mayor Nuatali Nelmes said: “This is one of the many actions contained within our Smart City Strategy that we’ve invested in, alongside energy-efficient solar projects, electric-vehicle charging stations, driverless vehicle technology and bike-sharing initiatives.

“This is the first step in our staged rollout of free Wi-Fi, which will eventually see the whole City connected as well as Beresfield and Wallsend local centres. Today it’s Newcastle East, but we’re working hard to make sure our new CBD in the West End and areas around Wickham quickly follow. Plans are well and truly advanced for these areas and we hope to make more announcements soon.”

The free, high-speed Wi-Fi is set to play a major role in supporting current and future technologies, such as the city’s smartphone app, EasyPark, which will soon direct motorists to available carparks in the city’s CBD, and smart screens that will tell visitors and residents about local activities and events.

The Wi-Fi is called ‘City of Newcastle free Wi-Fi’ and does not require a password.