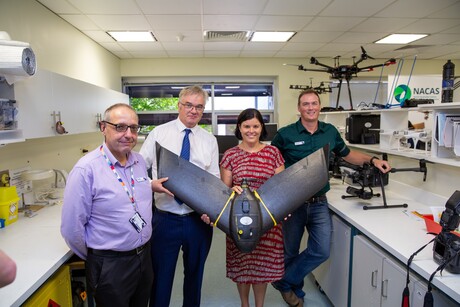 The Northern Territory Government is trialling custom-made, state-of-the-art medical drones with a flying range of 250 km, to deliver potentially life-saving medicines. The drones will expedite the delivery of time-critical medical items into hard-to-reach and seasonally inaccessible remote communities, helping save lives and reducing costs of delivery. iMOVE, a national centre for collaborative research in transport and mobility, will fund the project, along with the NT Government Department of Health and Charles Darwin University (CDU).

The iMOVE Cooperative Research Centre revealed that the project will also pave the way for future delivery of critical items such as cold-storage vaccines (for COVID-19) in regional and remote communities.

The project will investigate the challenges of using drone technology to deliver health services in the Northern Territory, such as procuring airframes that can manage vast distances, and adapting technology to withstand hot, humid and monsoonal climates. The project will also involve developing a drone test flight centre in the Northern Territory.

The project will explore how to integrate drones into the current health transport infrastructure framework. The project will plan works with the Civil Aviation and Safety Authority to identify and regulate flight paths within current airspace requirements.

Talks are also underway with manufacturers for suitable drone airframes capable of handling wet and dry seasons, and with a maximum flying range of 235 km. Drone services consultant UAV is advising on the project. Drone pilots will soon be recruited and will undergo specialist training.

iMOVE Programs Director Lee-Ann Breger noted that regional communities face medical access and health supply issues, adding that this doesn’t have to be the case with the provision of technology.

“There are about eight million people living in rural and remote parts of the country — that’s about a third of our population living in places where getting life-saving medical supplies is not only a race against time, but also a battle against the tyranny of distance, harsh landscapes and unpredictable elements,” said Breger.

Breger said the project aims to create an efficient model so drone health delivery services can eventually be rolled out in other regional locations across Australia.

NT Minister for Health Natasha Fyles said this technology will open the door to new jobs and opportunities, and keep Territorians in remote areas healthy and safe.

“The use of drones will be a game changer when it comes to enhancing our healthcare system. It doesn’t matter whether you live in the city or in the bush — Territorians deserve to have access to the very best health services, and this new technology will be a driving force in this space,” said Minister Fyles.

CDU Interim Vice-Chancellor and President Professor Mike Wilson said the university will investigate the potential in using automated aircraft for the delivery of time-critical medical items to remote communities across the Northern Territory. Professor Wilson added that this partnership will be a testing ground for the application of autonomous systems into healthcare delivery across Australia.

“Drones are already being used in health care in developing countries; however, we need to undertake research to understand where they can reduce costs and improve healthcare outcomes for remote communities in the Northern Territory,” said Professor Wilson.

The Tasmanian Government is calling for expressions of interest in developing a new ticketing...

What has COVID-19 taught us about infection prevention and control?

What role will 5G play in delivering critical communications?