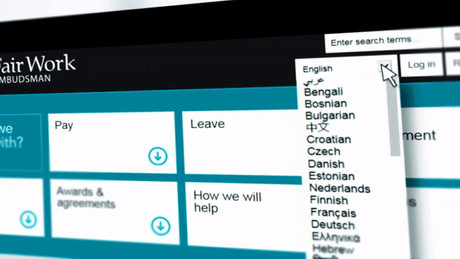 Australia’s Fair Work Ombudsman has added translations to 40 languages other than English to its website content aimed at informing workers about their workplace rights and obligations.

The new translation functionality is designed to make it easier for overseas workers and those from linguistically diverse backgrounds to seek workplace assistance, following multiple scandals over company exploitation of employees.

In one of the highest-profile examples, convenience store chain 7-Eleven was recently forced to pay around $57 million in wages to mostly overseas workers underpaid by franchisees — often student workers exceeding their visa conditions who in at least some cases were threatened with deportation if they complained about being underpaid.

Ombudsman Natalie James said her agency is strongly committed to ensuring that all people working in Australia have the information they need to stand up for their workplace rights.

“Language barriers can represent a significant obstacle to workers seeking to find out what their rights and entitlements are, knowing where and how to seek help with workplace issues, or having the confidence to speak up,” she said.

“We know that this can leave workers vulnerable to exploitation and we see far too many examples where people of culturally and linguistically diverse backgrounds, particularly visa holders, are treated unfairly and unlawfully in the workplace.”

The translations are also aimed at ensuring new arrivals to Australia who are interested in starting businesses in the country have the information they need to ensure they comply with workplace laws, she added.

The Ombudsman has also recently launched its Anonymous Report website function in 16 languages other than English, published six in-language videos aimed at raising awareness of Australian workplace laws among visa holders and launched a strategy aimed at reaching out to international students to urge them to report cases where they are being exploited.

“We are here to help all employers and employees in Australia to understand their workplace rights and obligations — regardless of which language they speak,” James said.