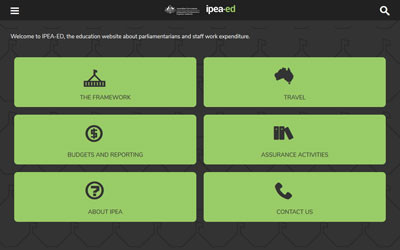 The website, known as IPEA:ED, provides easy-access education anywhere, anytime for parliamentarians and their staff about their obligations when spending public funds.

Developed by Canberra-based OPC IT, the IPEA was awarded in the Culture and Capability category, which focuses on initiatives that help strengthen the culture and capability for innovation by developing a mindset where doing things better is a daily habit.

“We were thrilled to learn that out of 62 nominations, IPEA recently won an Institute of Public Administration (IPAA) Innovation Award for their educational resources and the IPEA:ED website,” said Michael Goss, Web Operations Manager at OPC.

IPEA, an agency within the Department of Finance, had sought a mobile app that could easily be accessed by users on mobile and tablet devices while travelling.

“We proposed a more sustainable and cost-effective option… A ‘mobile first’ website that would closely resemble an app, be accessed from mobile devices in the same way as an app, but for a fraction of the cost,” Goss said.

The Department of Finance engaged OPC to deliver the website, which involved all elements of the project including coming up with a design that closely resembled an app, and ensuring accessibility and responsiveness.

While accepting the award, IPEA referred to the project as “intuitive” and said it was a “world first” to present information to this audience in this way.

“We feel privileged to have been a part of this incredible project and extend a huge congratulations to IPEA for their well-deserved win,” Goss said.

The funding will build on four years of modernisation and digitisation work, totalling $16m, to...

Airservices Australia has engaged Rimini Street to continue to provide support for its...

IT lessons for education from the COVID-19 crisis

Less than 10% of APAC orgs have a CISO