Why AV and co-working are perfect partners in business 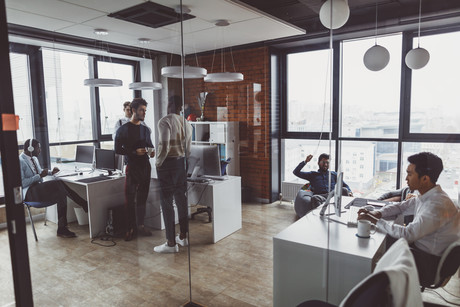 You’ve probably noticed that the way the world works is changing. Recent research from Knight Frank, for example, showed that the number of coworking spaces in Australia grew by 297% between 2013 and 2017, representing 0.6% of the nation’s office stock.

This figure will rise to about 12% by 2030, according to new research by global workspace provider, Regus. The trend is driven by cost savings for organisations delivered through reduced space requirements, improved staff productivity and decreased commute times.

It has been enabled by improvements in technology that allow workers to collaborate effectively from different locations.

“I’ve seen the technology become more affordable. Its reliability has improved. Instead of it being purchased by businesses because they feel like it’s something they have to do, now it’s something they need to do for people to collaborate and work more effectively, efficiently and productively.”

Businesses are investing in technology for video conferencing that enables them to connect with staff anywhere in the world. It’s more affordable and easier to use than ever, he said.

This has changed contemporary office design, with things like filing cabinets and flip-charts becoming obsolete.

“Aesthetically, that changes the look and feel of the office,” Fletcher said.

“You can use that space more effectively for things like quiet spaces and thinking spaces.”

The rise of smart devices means people can hold much of what they need for work in the palm of their hand, he added.

This has led to the office being thought of as a haven.

“There’s a need to create an office space where people want to come spend time with their colleagues,” he said.

“It’s my experience and the general experience of people we speak to, that the best work gets done face to face, so they need to provide a welcoming environment where the technology fundamentally works, it’s easy to use and it doesn’t detract from getting the job done.”

This face-to-face collaboration doesn’t necessarily have to be with people from the same organisation, Fletcher noted. Collaborative workspaces enable people to “network more broadly with other organisations and find out how their businesses can work together and do business together”, he said.

“But they’re also going back to that space which is warm, it’s inviting, it’s an escape from people’s daily lives.”

“Then you’ve got a whole host of businesses with people travelling nationally and globally who want the ability to go in and be productive in an office. That’s where coworking offices are really finding their feet.”

This shift to more flexible working is made possible by audio visual (AV) technology.

“Those coworking spaces are only going to be as robust as the technology…inside those environments,” Fletcher said.

“There is a need to provide the workers that you’re trying to attract to your business the freedom and the ability to work from anywhere, but they still need to be connected. AV provides a really core part of that connection. AV is the tool that provides the ability to communicate effectively — video conferencing, sharing content — the opportunities are pretty broad.”

“We will see, I believe, more and more of these co-working spaces be developed. Take Sydney for an example — we’re seeing co-working spaces pop up 20 to 30 km outside the CBD and businesses leveraging that to save their workers an hour, two hours or three hours’ commute each day.”

Capitalising on the trend

AV providers can capitalise on the trend by getting in at the design stage. Connected Vision, for example, has “directed some focus to what the smart workplace looks like and how we can be active in that space from a very early stage of a building or a workplace design”.

Another growth area is in managed services, Fletcher said.

“You spend thousands and thousands of dollars on these [systems] and you want to make sure they’re working at their optimum.”

They have implemented platforms for monitoring spaces and gathering information about whether the technology is working effectively and to proactively manage any issues.

He said their clients are “seeing the value of having a managed services partner looking after AV systems and networks because they know how important those networks have become”.

“It's that managed services space which is becoming a huge opportunity for our business as well.”

Speaking of collaboration, Integrate is Australia’s annual trade show for AV and IT industry professionals. Make great business connections and discover all the latest innovations alongside the most comprehensive AV education program in the southern hemisphere, with speakers including Dan Fletcher. Integrate will be held at the Melbourne Convention and Exhibition Centre from August 27–29 2019. Find out more about the event and register free here.

Emerge from this experience with an exponential vision and action plan for the future.

The right technology solution can help ensure your organisation meets the highest levels of...

The SingularityU Summit is coming this October to educate, empower and excite individuals and...